One of my favorite books of 2014 is Poor Doreen – A Fishy Tale, written by Sally Lloyd-Jones and illustrated by *Alexandra Boiger. Want a book with a superlative VOICE? This is it. 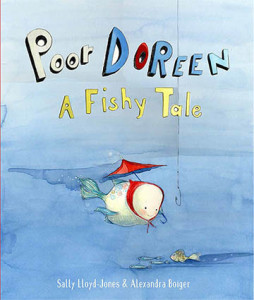 When reading this story for the first time, I smiled all the way through. But then I heard it read aloud at a writing retreat. Holy Mother of Picture Books. When every one of nine grown women is tipping off her chair and laughing so hard she’s pulling out tissues to mop her tears, you know you’ve got something special.

Here’s the synopsis from the title page: “A fish named Doreen gets into all sorts of trouble on the way to see her cousin.” 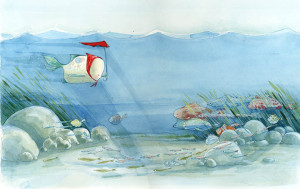 An understatement, that. Doreen, with her red headscarf and umbrella, is a happy-go-lucky ding-a-ling, clueless and irrepressible no matter what dire circumstances befall her. And they do. When she chomps a fishing lure she has mistaken for a tasty dragonfly, for instance, and is reeled through the water at a breakneck pace, is she distressed? Nope.

“Whee!” cheers Doreen. “What a REMARKABLE swimmer I am! I’ll be with my cousin in no time”! 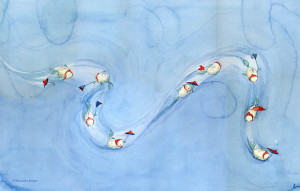 So Doreen’s voice is appealing by itself, and the cheery artwork captures her cock-eyed optimism and pumps up the humor beautifully. But then, THEN, toss in a droll narrator who can’t resist adding her own play by play. When Doreen is reeled close to the fisherman, he yanks her up into the air. She yippees again and exclaims, “I’m going on an outing!”

On the facing page, the narrator interjects:

These reality checks appear throughout the story, serving as constant counterpoints to Doreen’s naiveté. And they’re way funny.

Reading books like Poor Doreen reminds me what a powerful storytelling tool voice can be – and motivates me to tinker with my own stories until their voices are one-of-a-kind distinctive.

Off to work on that….

* Illustrator Alexandra Boiger graciously shared her artwork for this post. Read more about her at www.alexandraboiger.com

Read more about Doreen and her creator, Sally Lloyd-Jones, on Sally’s website:  http://www.sallylloyd-jones.com