Home Uncategorized Mimi and Bear in the Snow

Mimi and Bear in the Snow 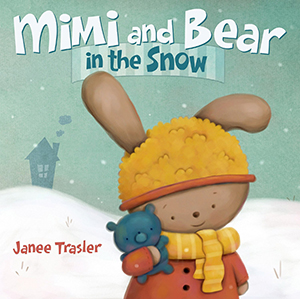 JANEE TRASLER is the author and illustrator of many books including the wildly popular Chickies board book series. Each one of these books is fun, adorable, and totally chickified. 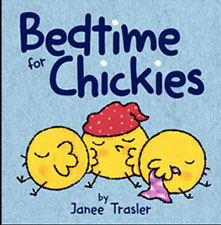 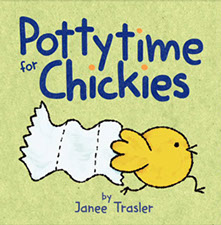 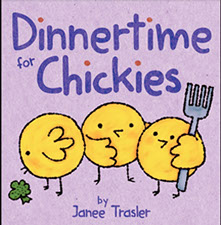 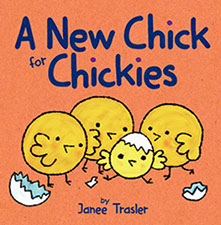 Janee was kind enough to agree to an interview.

Janee, tell us about Mimi and Bear.

Mimi is a little girl bunny and Bear is her teddy bear, but more than that, Bear is Mimi’s constant companion. Whether she’s ice skating for the gold medal or making fancy hats for tea with the queen, Bear is right there with her — until suddenly, he isn’t. 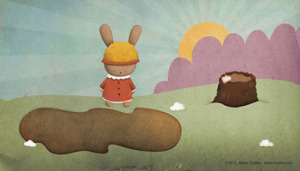 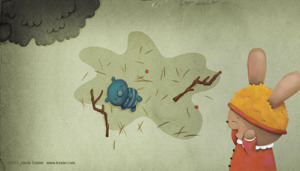 I love behind-the-scenes skinny! Where did you get the idea behind this book? Which came first, the text or the art? Do you have any early sketches or special tidbits that you’d like to share? 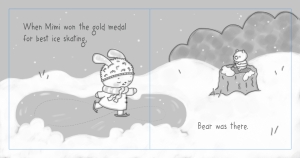 Mimi started out as just an exercise. I wanted to try a more painterly style, so I drew a picture of a little rabbit and her mother with a packed suitcase. Bear must have been packed away in the luggage because I didn’t draw him. 😉 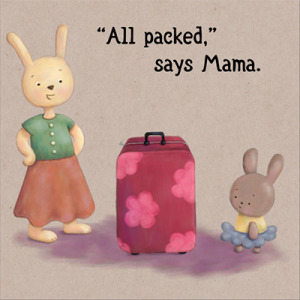 I work digitally, and though I usually get a bit of texture in my work, I was missing that look of a textured substrate behind my work. I scanned in some different papers and played around with them until I found one that felt right. It happened to be the inside back cover of a paperback book I read OVER and OVER as a teenager – Double Date by Rosamond du Jardin.

It was published way before my time, and I have no idea where we got it, but judging from the stamp on it, we either bought it from the library when they took it out of circulation, or my older sister is a library criminal.

The scan made a lovely backdrop for Mimi; it’s aged and has some cool water stains from being read in the bathtub (this is why people don’t lend me books).

When my agent submitted the dummy, we included this style and another much less painterly style as color samples. I was really happy they chose this style. I felt the softness really went with the story.

What particular challenges did you face while writing/illustrating Mimi and Bear in the Snow?

The biggest challenge was that I had four other books to illustrate (three of them still had to be written) and everything was due within the same six months.

Janee was kind enough to also include a visual. 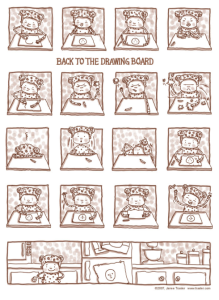 I’ve got two more Chickies books in the works, a new series I’m working on with HarperCollins, and several other genius/sucky ideas hiding in the drawer brewing. I’m also working on a possible sequel for Mimi – she’s got more story to tell.

Thanks so much for stopping by Picture Book Builders, Janee! 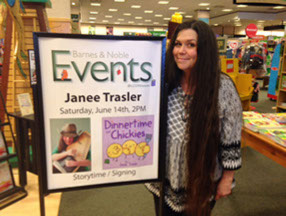 She’s also recently acquired a 100+ year old building that is part studio and part music hall, so next time you’re in Texas, stop by for a jam.