Penny Parker Klostermann hit it big with her sparkling debut, 2015’s There Was An Old Dragon Who Swallowed a Knight (Random House, illus by Ben Mantle). Now she’s tackled an original and funny mash-up story that stirs together fairytales and a guy whose fondest desire is to be a chef. 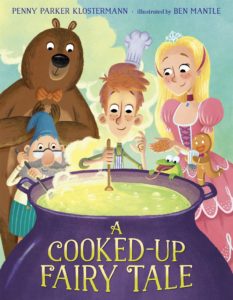 From Kirkus:  “Klostermann’s triple-twisted tale is a cute concoction that children familiar with the traditional stories will enjoy. Mantle’s bright, cartoon illustrations pair neatly with the text and propel the story with whimsical sight gags and charm to spare.”

One thing I preach about (in picture book workshops) is crafting quick openings, so I love that Penny K does just that: “Although William lived in the magical land of fairy tales, he preferred pastries to princesses, kitchens to kingdoms, and recipes to the Royal Reporter.” Boom. Who’s this about? William. What does he want? To cook. 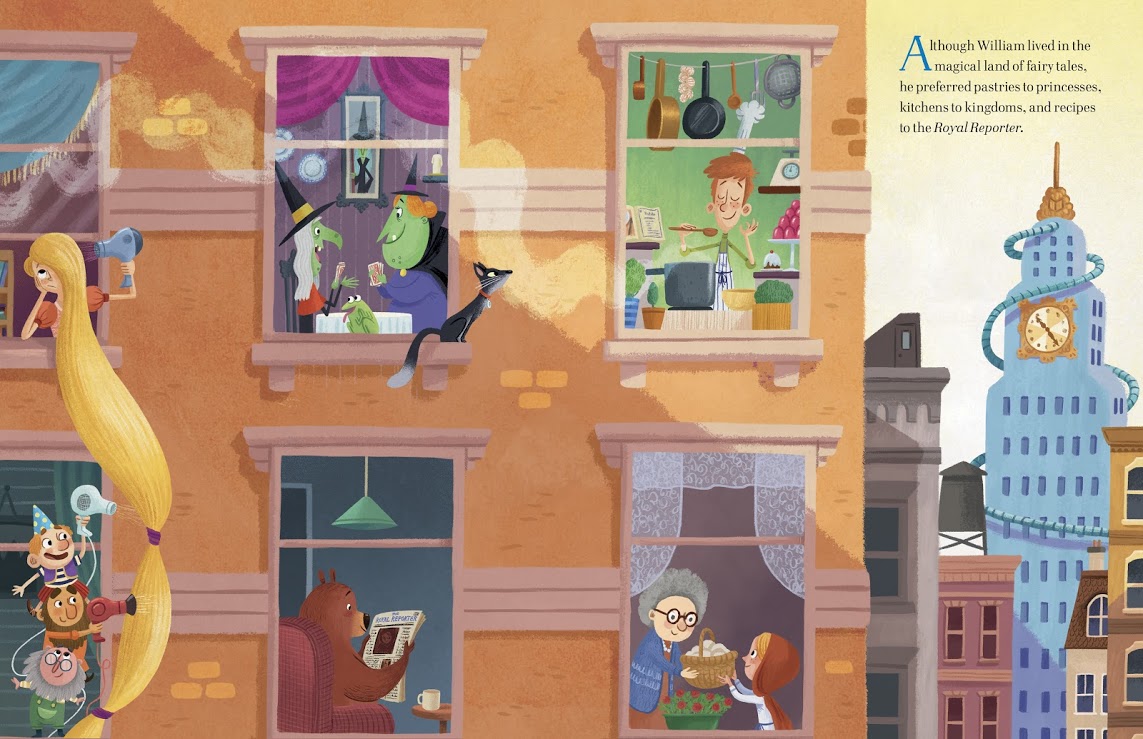 William tries working at The Brick House (run by pigs), but he’s expected to cook up a wolf. Ack! He works at the Three Bears Bistro, “But folks there were very persnickety.” (as in too cold, too hot–ha). He even bakes for Gingerbread-on-the-Go, but chasing cookies… ugh.

Eventually, William decides to cook from home, but he needs supplies. So he heads to market and comes upon a box that’s fallen from a passing truck, a box marked “Fairy-Tale Food.” Hmm. He goes home and uses the apples, the beans, and the pumpkin to whip up “delectable creations.” Unfortunately, others were waiting for those items. See below. 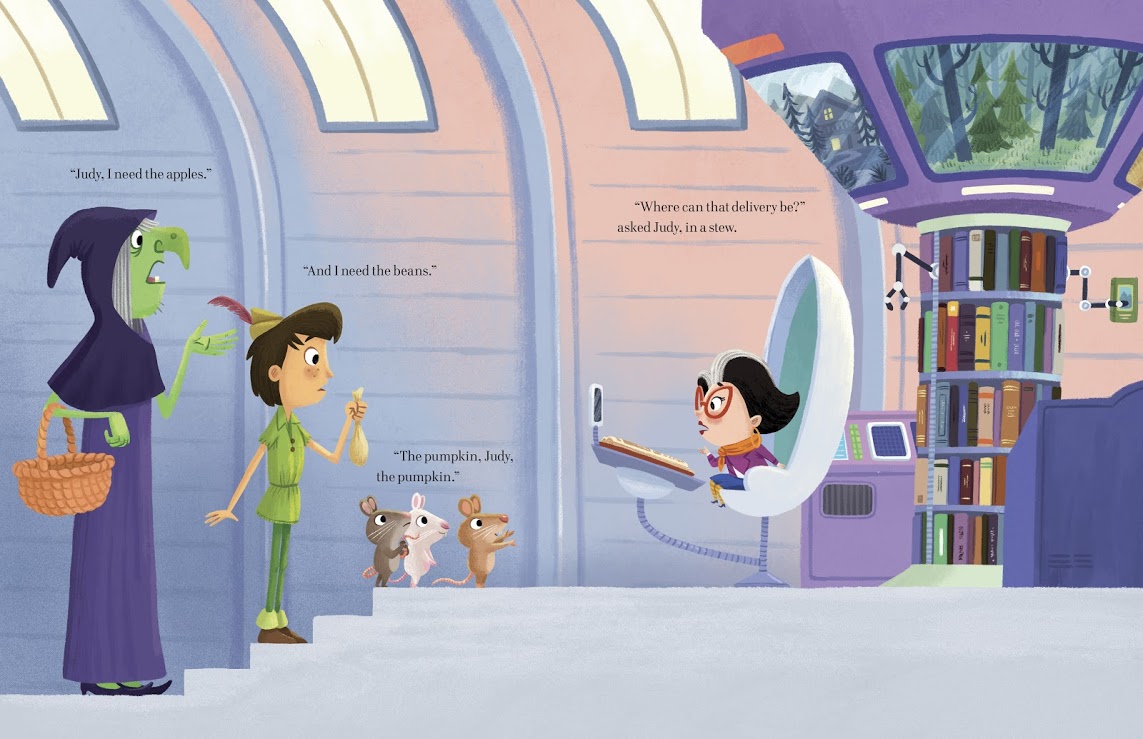 Oops. William gets an earful from fairy tale boss, Judy, who’d needed those foods in their original form:  “Don’t you know anything about fairy tales?” Of course he doesn’t. He’s been nose deep in cookbooks. To get him up to speed, she hands him a book of fairy tales. When, having read the tales, he reports back to Judy, she tells him the results of his meddling. One tale needs straightening out, and pronto! 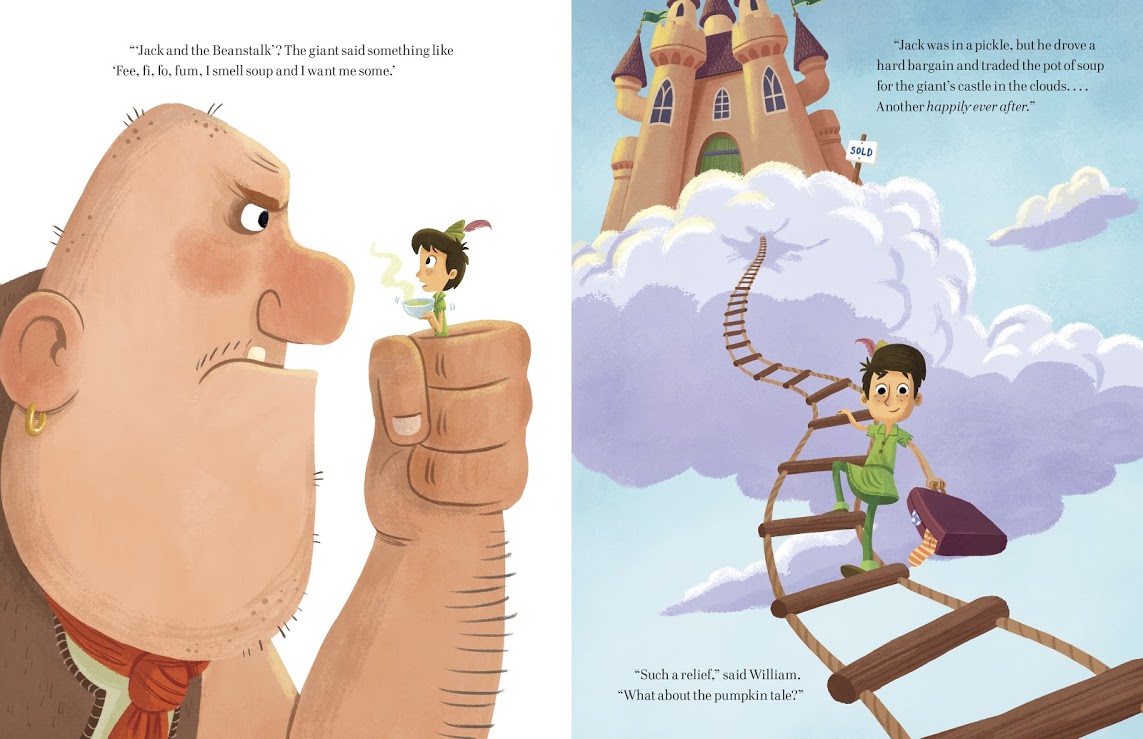 I don’t think I’m giving anything away letting you know that William not only fixes the problem he’s caused, but finds a true-to-his-character way to live “happily ever after” himself. Well, this IS a fairy tale story!

Penny K was kind enough to answer a few questions for us.

JE: How’d you get the idea for A Cooked-Up Fairy Tale? (Reminds me of Chopped!)

PPK: I was reading David Ezra Stein’s INTERRUPTING CHICKEN for the umpteenth time (because I LOVE, LOVE, LOVE that book!) and I got to thinking about how clever he was to use well-known fairy tales in telling a tale of his own. I began brainstorming ways I could do this. How could I write my own story and incorporate fairy tales in a way that would make sense and flow? I began with a list of fairy tales and then listed common elements. Since food is present in many fairy tales, it quickly rose to the top of my list. From there I had to come up with a problem. I pondered this for quite a while. Then PING (egg timer!)! What if something happened to the food in those fairy tales where it played an integral part? Snow White’s apples? Jack’s magic beans? Cinderella’s pumpkin? That’s when William, the chef, was born. William, who never paid attention to fairy tales. William who only wanted to cook. William who ended up cooking-up his own fairy tale.
Funny you should mention CHOPPED! because I watch CHOPPED JR. all the time and I really think they should feature my book and have fairy tale ingredients in the baskets! It would be so much fun! Do you think you could arrange that, Jill?

JE:  Ha! That would be fun. I’ll get right on it. You must’ve been thrilled to hear that Ben Mantle could do the illustrations again. Were there any surprises this time around?

PPK: Thrilled is an understatement because Ben knocked it out of the kingdom with his illustrations for THERE WAS AN OLD DRAGON WHO SWALLOWED A KNIGHT! And he did it once again with A COOKED-UP FAIRY TALE. There was a surprise. DRAGON makes an appearance and that made me so happy. Ben found a clever and humorous way to work him in. As far as other surprises . . . when I first saw the sketches and then the art, I felt like there were surprises with every page turn. Maybe down the road I will get used to seeing the art for a book for the first time but for now I delight in the surprises!

JE:  His art IS delightful. Your first book was written in rhyme. This one is lively prose that leaves space for page-turn magic. Love that! I have to ask:  Did you try writing this story in rhyme and switch to prose, or did the story come to you in prose?

PPK: This story came to me in prose. In fact it was one of my first attempts at writing a story in prose. I know writing a rhyming story is difficult but writing this story was more difficult for me than writing DRAGON. DRAGON was a retelling so I had somewhat of a story arc and had to come up with the “something special” to make it stand out. With COOKED-UP I had the challenges of story arc, plot, etc. I learned a lot writing this book! I can definitely say that writing many stories in rhyme before attempting prose heightened my awareness of rhyme, rhythm, and poetic techniques which helped polish this story.

JE:  What are you working on now?

PPK: I have several manuscripts on submission and more manuscripts in different states of revision. Of these, about 40% are in rhyme and 60% in prose. I’m excited about each project and am hoping that one or more will land on the right editor’s desk.
Thanks so much for having me on Picture Book Builders. I just love reading the posts here and learning about new books.

Thank YOU, Penny! Readers, A Cooked-Up Fairy Tale will hit stores September 5, but you can preorder now from Amazon, Barnes & Noble, or IndieBound! AND Penny has agreed to a giveaway! Yay! All you have to do is leave a comment below by September 15th, and Penny will draw one lucky winner’s name and send you your very own copy! I’ll let everybody know who that is in my next post on September 26th. Good luck!

And you can still win a copy of If You Were the Moon, by Laura Purdie Salas (until Sept 10th) and I Love You More Than the Smell of Swamp Gas, by Kevan Atteberry (until Sept 15th). All you have to do is comment on those linked posts, and you’re entered. Good luck!

Sequel alert! Those of you who have enjoyed the adorableness that is Sue Gallion’s Pug Meets Pig will want to get a load of her follow-up, Pug & Pig, Trick-or-Treat. The book oinked into stores July 25th and has stars from both PW and Kirkus. Kirkus, people! You know how difficult that is, right?

Friend pub! My pal Linda Skeers has a new middle grade nonfiction book that’ll knock your socks off. Women Who Dared:  52 Stories of Fearless Daredevils, Adventurers, and Rebels (Sourcebooks Jabberwocky) will be in stores September 5th. Would your kiddos savor the daring exploits of 52 women they’ve likely not heard of before? Of course they would. Wish this one had been around when my kids were seeking people they might learn about for History Day. Go! Get one! Now!