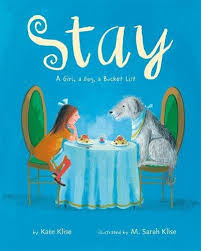 Sometimes, people tell me they’ve always had an idea for a picture book.

And, sometimes, when they tell me what their idea is — A toothbrush that joins forces with some dental floss to fight crime! An explanation of why all children are special told in the style of Geoffrey Chaucer — all I can do is look pleasant and nod because it doesn’t seem like a good idea to me, but I’m too polite to say so.

Of course, there’s always the chance I could be wrong.

Like if someone had said to me: “I want to write a picture book about a bucket list for a dog,” I might not immediately have thought the idea had potential.

But it does. At least in the hands of author Kate Klise and illustrator M. Sarah Klise.

Together, they have created STAY: A GIRL, A DOG, A BUCKET LIST, which was published by Feiwel and Friends this year.

It has all the things I like in a picture book.  Simple, clear language. Relatable scenarios. Love. A moment that makes you say “Awwww …”

And, yes, it is about a dog that’s getting older and dying. Which initially would have given me pause, because  most parents don’t want their children to start worrying about when the family pet might pass away.

But this story handles things beautifully. It’s essentially a tale (tail?) of friendship. Eli the dog has always been there for Astrid, from the moment she joined her family as a small baby and all along as she grows. They do all the things kids and dogs do — visit the park, sleep in the same bed. Share snacks.

Life could go on like this forever. But, see how beautifully Kate Klise sets up the change to come:

“As they grew older, Astrid began to notice other differences. ‘I’m getting bigger than you,’ she said. Yes, thought Eli, but I’m getting older than you. It was true. For every birthday Astrid celebrated, Eli had the equivalent of six or seven birthdays. Sometimes eight. When Astrid was six, she was still a young girl. But Eli was an old dog.”

Perfection. (Go back and read it again to admire how wonderfully it works.)

After that, Astrid starts creating a bucket list for Eli. The word “death” is never used — on the list or in the book. But the list contains things Astrid thinks she and Eli should do together before Eli gets too old.

And, it’s a great list. Eli and Astrid go for a bike ride, read books, see a movie, and sleep under the stars and under Astrid’s covers. Astrid even gives Eli a bubble bath. 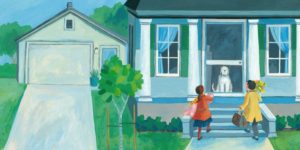 Throughout their adventures, Astrid is leading the way. Eli enjoys what they do, but it’s Astrid’s list, and it’s as much for her as it is for Eli. Then, after the items on the list are checked off, Eli gets too tired to do anything but stay at home with Astrid.

How does it end, you ask?

Beautifully, but I’m not going to tell you how, except to say Eli does not die in the book and that the ending is the “Awwww ….” moment I mentioned before. As a writer, I imagine it took Kate Klise a lot of pondering and rewording and walks around the block to make that ending as perfect as it is.

I tip my hat to her.

So, if you’ve got an idea that might not initially scream “I’M A PICTURE BOOK,” like a dental hygiene crime-fighting saga or a Chaucer-inspired ode to individuality, it still might be.

IF … you are a master at your craft.

Names. Some people might think “Astrid” is an unusual name for a little girl and wonder why the author went with something so unusual. Many times, when I critique manuscripts for conferences I attend, I see very basic names used. “Timmy.” “Susie.” “Janie.” I think the writers are trying to play it safe.

But, I just got the directory for my daughter’s school, and here are a handful of name of the elementary kids. “Florentina.” “Estelle.” “Maxine.” “Jagger.” “Tarek.” “Jocelyn.” “Lucille.” “Reidar.” “Ivan.” “Stella.” “Celeste.” “Holden.” “George.” “LuElla.” This almost makes me want to have another child just so I can name it “Maxine.” But, no. I’ll stick to using great, creative names in my picture book manuscripts.

Books.  The Klise sisters have other wonderful titles out including one of my all-time favorites — STAND STRAIGHT, ELLA KATE. This is a delightful nonfiction title that everyone who hasn’t read should. My daughter, whom I can’t believe used to be that small, poses with it below. Check it out, too. 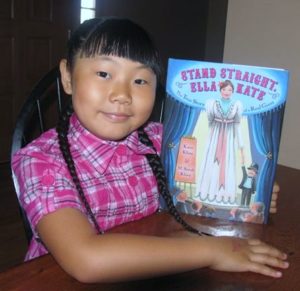