Home Uncategorized No Guts, No Glory

No Guts, No Glory

This is a story-behind-the-story post, but it’s also for those of you who are waffling over attending a writing conference in 2015. Consider this your sign.

Why? Because wondrous things happen at conferences, specifically SCBWI conferences. Just ask my friend Sarvinder Naberhaus, who submitted a stack of poems for an editorial critique a few years back. One of them eventually became Boom Boom, her debut picture book (this is the GLORY part). 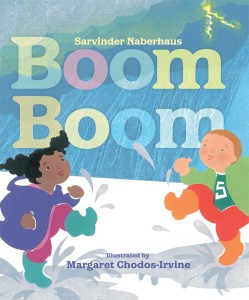 “This large, brightly colored picture book … revolves around a class of preschoolers experiencing the four seasons. The thunderstorms of spring give way to the sun and flowers of summer, then to the fall leaves and winter snowflakes. Pictures have been created from various nontraditional materials, including textured wallpaper, stencils, plastic lace, and vinyl fabric, set against mainly white backgrounds. They show the children exploring the outside world as the weather changes. Text is minimal, limited to the sound of the outside world: “drip drip,” “crinkle crinkle,” “swirl swirl.” Tying everything together is the underlying growing friendship between two of the children—a shy boy and an outgoing girl—depicted wordlessly through the illustrations.”

Nice! Now take a look at some of Ms. Chodos-Irvine’s lively and adorable illustrations: 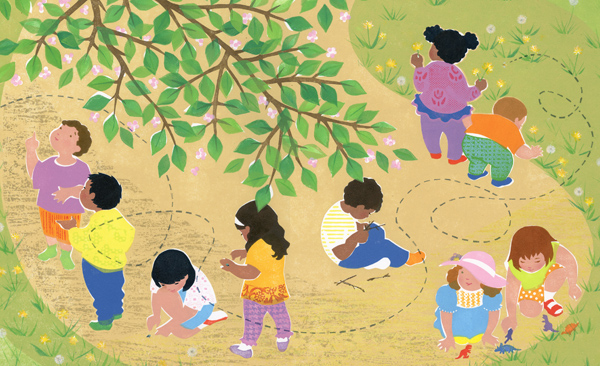 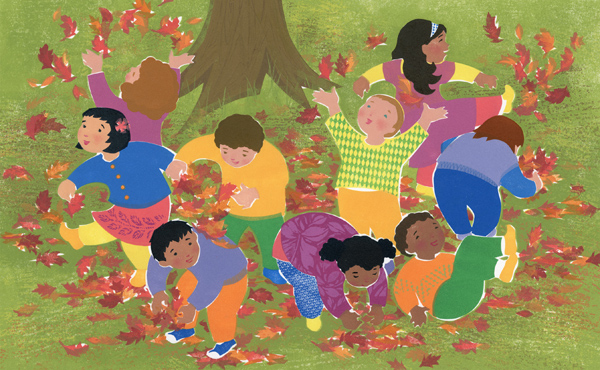 Lovely. Can you imagine what a great read-aloud this would be with a group of pre-schoolers? I asked Sarvinder a couple of questions that she answers below.

JE: Picture books with seasonal themes are plentiful, but your minimal text (32 words!) makes yours stand out. How did you settle on this format? 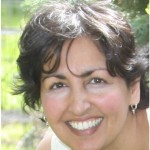 SN: I remember my thinking process clearly, even though I wrote this many years back. I love the 4 seasons because I love patterns when I write. Perhaps this goes back to my songwriting background. Once you figure out the rhythm and melody for the first stanza and chorus, all you have to do after that is fill in the blanks for the rest of the song, because it repeats. A pattern is an outline, a frame on which to hang the rest of your story.

I remember sitting at my computer desk early in the morning, after sending the kids off to school, I stole some time to write. I wanted to write about the seasons, but there are sooo many books on that topic. I started asking myself questions. I reasoned with myself, and thought about the 5 senses. I asked, “What hasn’t been done with the 5 senses?”  I knew writers often left out smells and sounds. So I asked myself, “What if I did the sounds of the seasons?”  The sound of a thunderstorm popped into my head, “Boom, boom, boom!”  So then I asked myself, “What if I only did sounds?  What if I only used those words?”  So I started writing down and repeating sound words, because I thought that was different. As a songwriter, it came out in rhyme, and that was fine with me.

When I finished, it ended up being a poem, although I never saw it that way. I always pictured it as a picture book. I envisioned it starting out with a wide-screen shot of a thunderstorm, but when it came down to “splash splash splash” I pictured the camera zooming in on a single child splashing in a puddle. It was lovely seeing that image come to fruition after 8 years.

This is how I explained my vision to my editor as well, starting out with a wide angle shot of the season, at the beginning of each stanza, but zooming in on the individual child on the last line. That took it out of the status of poem, and moved it into the realm of picture book, because it could be illustrated. The pairing of words didn’t obviously lend themselves to illustrating, so it was a little bit out of the box, which was my aim to start with. It’s so difficult to think of something that hasn’t been done before.

JE:  Explain why you didn’t include illustration notes (this is the GUTSY part).

SN: This particular manuscript did not come with illustration notes, only because I happened to meet the editor face to face. I was able to discuss my vision for this “poem” with her during our critique session at one of our SCBWI conferences. During our time, I jumped in and was able to explain to her what my vision was for the piece. I had actually left plenty of room for an illustrator to interpret my sparse text.  I feel lucky she was able to see inside my vision.

After meeting with Allyn [Beach Lane Editor Allyn Johnston], and explaining what I saw in my brain, she asked to hold on to my manuscript (the poem). I was elated, and I think she was excited too, to suddenly have this turn-around with what seemed to be a simple poem. And Allyn does “simple” beautifully. I was fortunate that she had edited many books, and I was able to check them out and “research” them to see what works I had that would match her style. I came up with one thing — Boom Boom Boom, and it was a fit. She called me six months later and offered me a contract.

Allyn matched up the book with illustrator Margaret Chodos-Irvine who did a marvelous job not only at illustrating, but at creating a storyline and characters to live through a year of the seasons. She added many subtle touches that you have to dig to find. She created nine characters, two main characters, and named them all. I also appreciated the diversity of the characters, representing a nice slice of America. She told a nice tale with her award winning artistic style.

Picture books are discovered in a variety of ways. But boy, I love a good conference success story, don’t you? Because I was at the above conference, I know that Ms. Johnston was paging through Sarvinder’s poems and about to flip the page on what was then called  Boom Boom Boom when Sarvinder jumped in. See? Gutsy! And they all lived happily ever after.

P.S.  Linda’s post last week, Starting Over, had me taking a look at my “in progress” files. I made the mistake of counting them….
In my “pb ideas” folder: 64
In my “need revision” folder: 23
On my desktop (the ones that are top priority): 6
New year, new energy? Hope so. Good luck, everybody!