Spring is right around the corner, and I can’t wait to watch my flowerbeds unfold, leaf by leaf. The weeding that soon follows? Meh. But that dirty work is rewarded when I come upon a toad hiding in a shady spot. Good to know they’re in there, eating the slugs that chew holes in my hostas. I especially like surprising a teeny little toady baby and watching it spring away. When I was a kid, I liked capturing them and keeping them in a bucket. In a perfect world, that would only last a few hours, then I’d tip the bucket and let them go. In reality, I sometimes may have kinda sorta forgotten that part a time or two.

This lifelong toady appreciation is obviously what led to my new rhyming picture book, Teeny Tiny Toady (Sterling). It’s illustrated by the super-talented Keika Yamaguchi, and I thought you all might appreciate an interview with her. Sterling was kind enough to provide a giveaway copy, too. And you know how we love giveaways! 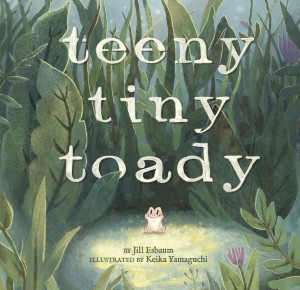 “When her mom and all her brothers are trapped in a bucket, it’s time for Teeny Tiny Toady to screw her courage to the sticking place and hop to the rescue. As big of eyes, personality, and emotion as she is tiny and pink of body in Yamaguchi’s swampy ground-level scenes, Teeny is “toadally” terrific. Shoved to the rear by her seven hulking brothers after bursting through the door with the news of their mother’s plight, Teeny hops behind, “wishing she could be a bigger, stronger, / hero kind of toad.” Then, when her comically dim-bulb brothers not only fail to tip the bucket over, but manage (after ignoring or co-opting several of her savvy suggestions) to fall in themselves, it’s left up to her: ” ‘I’m too little,’ Teeny blubbered. ‘I can’t do it! Not alone!’ / But she had to, had to, had to. / Tiny Teeny, / on her own.” One unlikely but successful stratagem later, everyone is free, jubilant, and praising their diminutive rescuer. ” ‘You’re a hero!’ / ‘What a kid!’ / ‘Wanna ride home on my shoulders, Sis?’ ” No surprise—”She absolutely did!” Yamaguchi’s illustrations are every bit as adorable as Teeny, her wee pink form hilarious when juxtaposed with her brothers’, who resemble warty tennis balls with limbs. A triumphant reaffirmation of the truth that large hearts can beat in small chests, told in playful verse that gallops along with nary a stumble.”

I certainly can’t improve upon that, so let’s get to Keika! 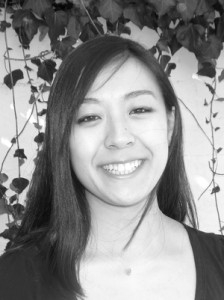 Jill:  Hi, Keika! May we peek inside your studio or work area?

Keika:  Sure! I currently work from a co-working place in Chinatown in Los Angeles. I’ve been here now for about two years, and I love it! I used to rent a desk monthly, but at the moment, I drop in with my sketchbook, my portable watercolor set, and my laptop. When I rented a desk, the setup I had looked something like this. 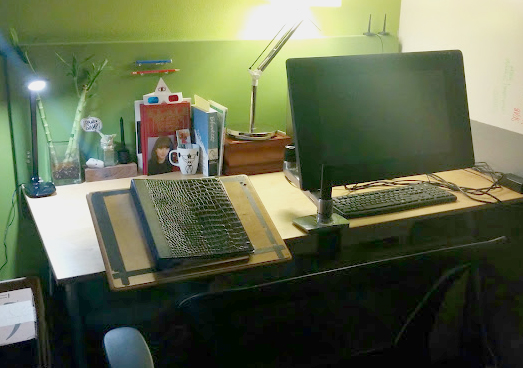 I would have books to read, my powerful computer and a Cintique setup. I change books and materials on my desk per project. 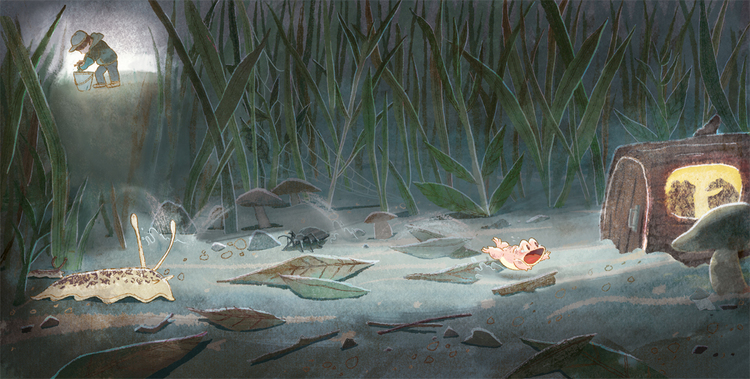 (Second spread:  Teeny’s mama has been captured, and she’s rushing home for help.)

Jill:  What did you find most challenging about illustrating Teeny Tiny Toady? Which spread ended up being your favorite? (Here’s one of mine): 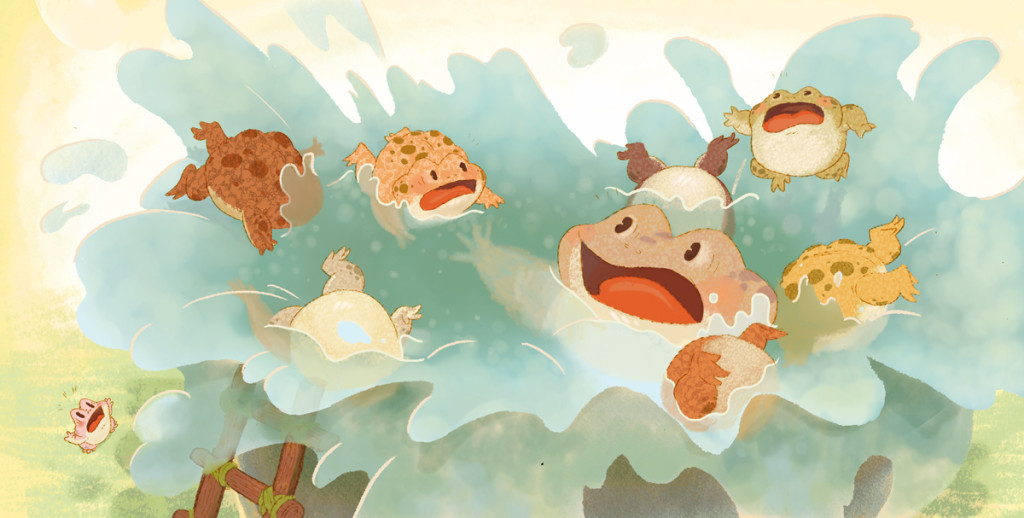 (On their third rescue attempt, Teeny’s genius brothers fall into the bucket with Mama, leaving only Teeny to save her entire family.)

Teeny shivered as the wind picked up
and blew across the pond.
As she watched it flutter lily pads
and everything beyond,
an idea fluttered deep inside
her warty little head
till she chased it round and pinned it down.
“I’ve got it!” Teeny said.

So did Teeny’s plan take muscles?
No, just brains and clever feet.
By the time the sun went down,
her rescue project was complete.

The first was the scene where Toady has an epiphany. All I knew was that she ends up coming up with a kite, she thought hard, and there was a breeze and a pond. How will I illustrate this spread as a powerful scene? And how will I illustrate the second scene, how she comes up with her solution? It was not specified in the manuscript. I felt that it was also important to show that she had to be brave while being clever. It took lots of trial and error. It was frustrating, because I know that this is the climax, it has to be one of the strongest spreads. I decided that she takes clues from her environment. I illustrated her being extra brave by facing all the fears she had in the beginning of the story such as spider, cobwebs, slugs, and big bugs. I’m happy with what I came up with in the end.

Another challenge was designing the mother toad. I knew I wanted the baby toad and the young toads to look small and round. The mother toad had to look like a full grown toad, which meant to me very sturdy, slimy, and bumpy. The first few designs of the mother toad were blobby, and she did not look anything like Teeny and her siblings. 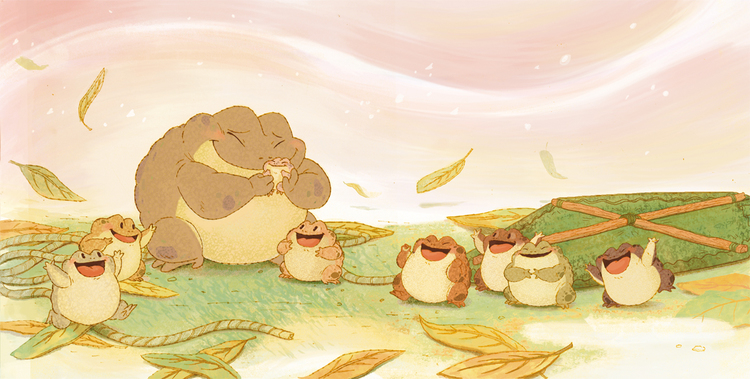 As for my favorite spread, it’s tough to choose just one but I really enjoyed coming up with spreads that illustrate Teeny’s fears and doubts. I had a lot of fun painting and designing the pages to exaggerate her feelings.

Jill:  This answer made me smile, because I hadn’t intended for Teeny to be afraid of those creatures she encountered at the beginning! But I love that you included bravery in the equation. And I thought she’d make the kite all by herself, so what a fun surprise that she had help. Cool the way that worked out. Next question:  Each of the books you’ve illustrated has a different overall look. You’re very versatile! What kind of questions do you ask yourself as you go about considering the style you’ll use for each new project?

Keika:  I have a vision right away when reading a manuscript. I time travel to my 5 years old self and ask these questions:

-Would I picked that book off of a shelf?
-Would it [the art] make me want to flip through the book?
-If English was my second language or I was struggling to read, would I still get a sense of what’s happening in the story when flipping through the pages? Or most importantly, will I be compelled to read the words?

Keika:  I’m working on a Chilseok and Qix story for a publishing company in Korea.

Keika Yamaguchi lives in Los Angeles with her dog, Ellie. She is also the illustrator of Puddle Pug by Kim Norman and What About Moose? by Corey Rosen Schwartz and Rebecca J. Gomez.

Readers, if you’d like to win a copy of Teeny Tiny Toady, just leave a comment below ON OR BEFORE MARCH 12th. I’ll choose one winner at random and let him or her know on March 13th, then announce it to the rest of you in my next post (March 29th).