Last month, a new writer emailed to thank me for a blog post that I had written back in 2010. Well! I had to go back in time and revisit this post for myself.  I realized that the information is worth sharing again. 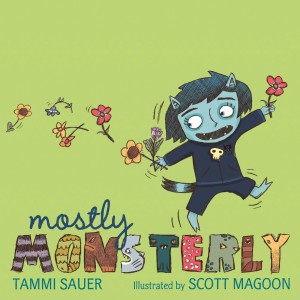 When writing picture books, I strive to tell as much as possible in as little as possible. This helps me to leave plenty of room for the illustrator to do half the storytelling through the art.

One of my key jobs is to use great words. Each word must count. Each word should be the best possible choice.

I usually start with the name of my main character. With my book Mostly Monsterly, illustrated by Scott Magoon (Paula Wiseman/Simon & Schuster, 2010), for example, my main character is a monster. I didn’t want to give her just any name. Kate wasn’t right. Neither was Hailey.

But Bernadette? Now, that was a name for a monster. 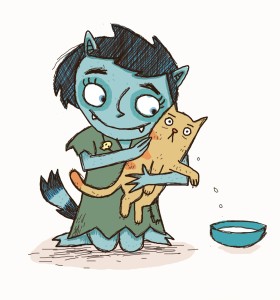 Once I had my main character’s name, I did some brainstorming. I jotted down words that had a monsterly feel and would help set the tone for my story.

Later, as I worked on the text, I drew from this list. Many of these words can be found on the first two-page spread of Mostly Monsterly. 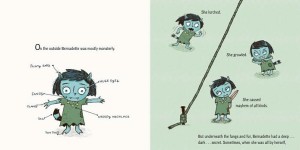 Not all of the words from my list, however, made it into the story. If a word didn’t add to the character development or storyline in some way, that word was not included. Also, since my picture books are humorous, I like to choose words that sound funny. This helps to create a more satisfying read aloud experience. In Mostly Monsterly, for instance, the words “fangs” and “slobber” made their way into the text. “Teeth” and “spit” did not.

Another thing I try to do is use specific words that show the reader something about the characters. My monsters never “walked.” They “lurched.” And when Bernadette was sad, I didn’t simply tell the reader, “Bernadette was sad.” I showed that sadness in this line: “Bernadette’s tail drooped.”

These are just a few of the things I do when it comes to selecting the right words. I want my picture books to sing! Or, in the case of Mostly Monsterly, grumble and growl.