Home Uncategorized Blown Away (And The Value of Paying Attention)

Blown Away (And The Value of Paying Attention)

I love books with visual humor—especially when the jokes sneak up on me over multiple readings. Take, for example, Rob Biddulph’s debut picture book Blown Away (HarperCollins, 2015). 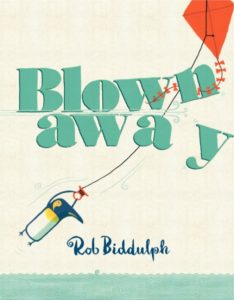 The first time I read it, I was taken with the charming art and simple rhymes that propel the story forward. And I mean propel. Our protagonist, Penguin Blue, inadvertently takes off on the kite ride of a lifetime. His friends—a couple of penguins, a seal, and a polar bear in a fishing boat—try to rescue him, but wind up taking flight too. Eventually they land on an island—a lovely one, but much too hot for our travelers. Luckily they’re a resourceful bunch, and with the assistance of a helpful elephant, they sail back home.

Great adventure story, I thought. But . . . um, what’s the deal with this dude on the last page? (Click to enlarge images.) 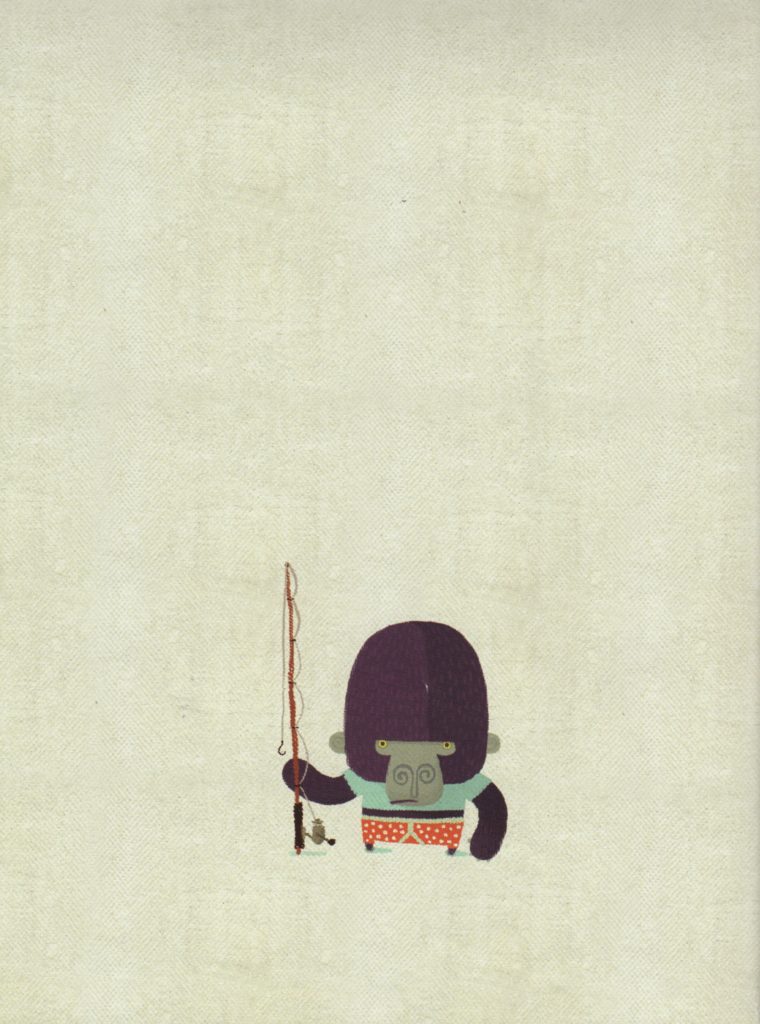 And now it’s time to fess up. When reading for PBB-worthiness, I admit I sometimes . . . (ahem) . . . skim through picture books.  And, in this case, by skimming, I missed many of the thoughtful little details that turn a good, solid picture book into a genuine gem, one sure to offer up delights over multiple readings.

So I read it again, this time more attentively. And I discovered all sorts of treasures. Like, for instance, when Wilbur the seal grabs a penguin and is carried aloft, his clothesline—bearing a pirate shirt, polka dot undies and a pair of socks—comes too.  (Don’t you love the kite and penguins silhouetted in the background?) 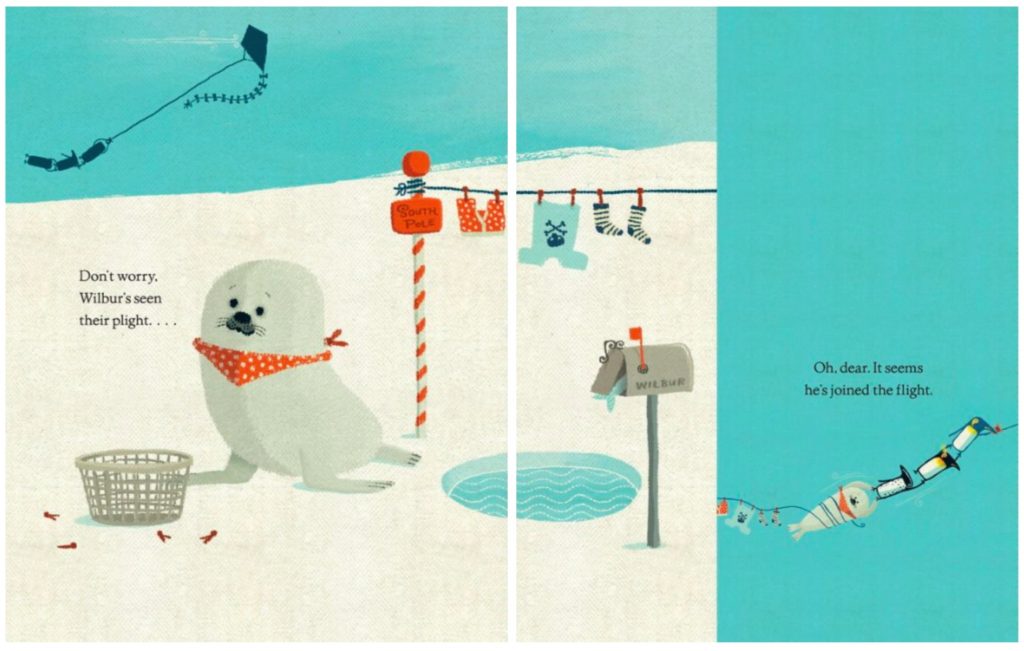 Then, in the subsequent spread, the clothesline catches Clive the bear’s fishing line and he, too, flies off. Although one of the socks falls into the ocean, the rest of the items wind up scattered in the jungle—which is where our last-page gorilla finds them. Mystery solved. 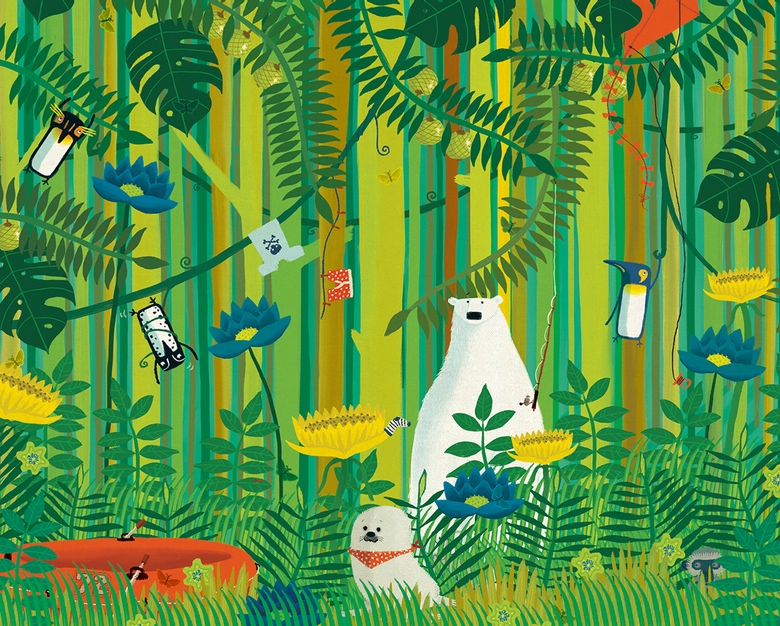 Looking at this jungle scene, you might also notice something—or, rather, someone—hidden in the lower right hand corner. This little monkey becomes a stowaway on the journey home, playing a pivotal, if silent, role in a very funny subplot. 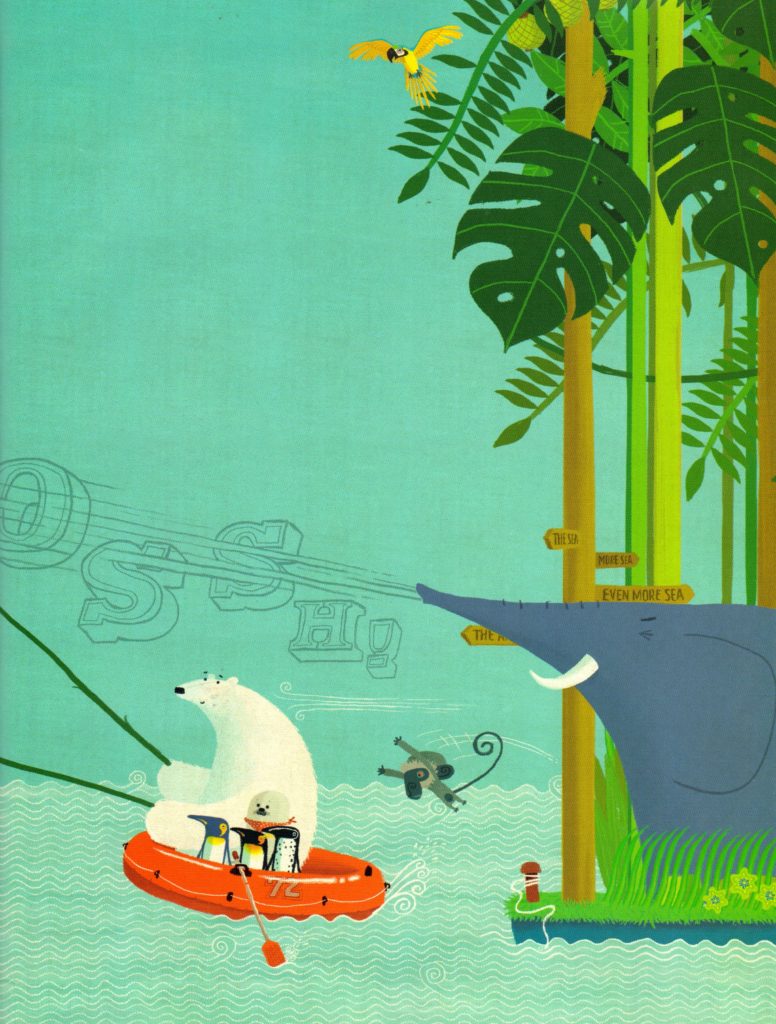 Then there are the ocean directional signs (see above), the penguin school bus (a very large whale), a clever cloud-counting opportunity, and, well, other stuff you’ll just have to discover on your own.

So check it out. And don’t rush. You don’t want to miss anything.

P.S. As a few critics have noted, polar bears are not found in the Antarctic, so this friendship is rather implausible. And, well, seals don’t typically wear polka dot underwear either.