How could anyone not stop, pick up, and thumb through a book called Pete With No Pants. 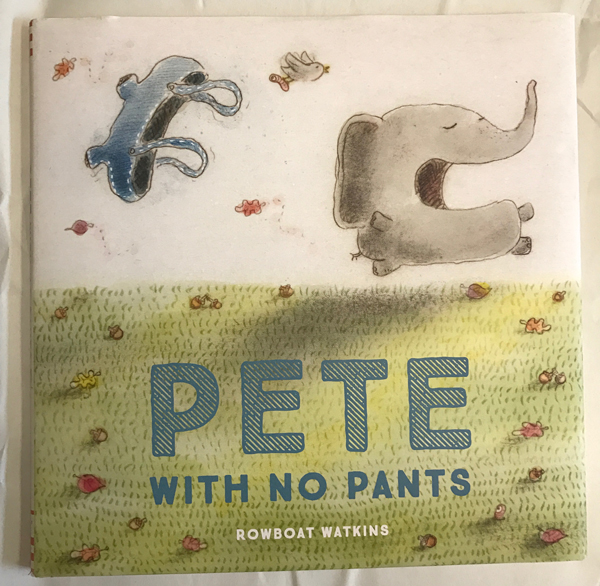 I mean curiosity alone would make me wonder 1) WHY is it a book, 2) is this appropriate, and 3) why doesn’t he have any pants, is he too poor to afford them? Were they stolen? Or, did he just lose them somewhere along the way? And who is this Pete anyway? (Which I realize is actually four questions in number 3), but what are you gonna do? Like Pete, I’m nosy.)

The latest book from Rowboat Watkins features Pete, a young elephant who enjoys his…freedom. And he is also asking the age old questions, “Who am I?” which is apparently easier without the constraints of trousers, and “Who’s there?” in response to the age old prompt of “knock, knock.” 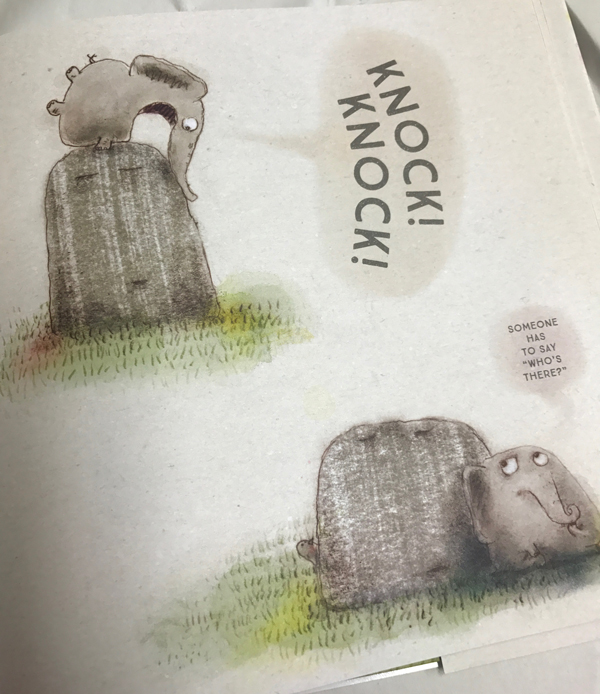 In his quest, his roundness and grayness and lack of pants suggests he might be a boulder. His joy at discovering this is quickly quelled as he discovers the stoney silence of his new found brethren. When he prompts them with a “knock, knock,” there is no reply. No, instead there is rock solid disinterest. “Boulders are the worst,” Pete declares. 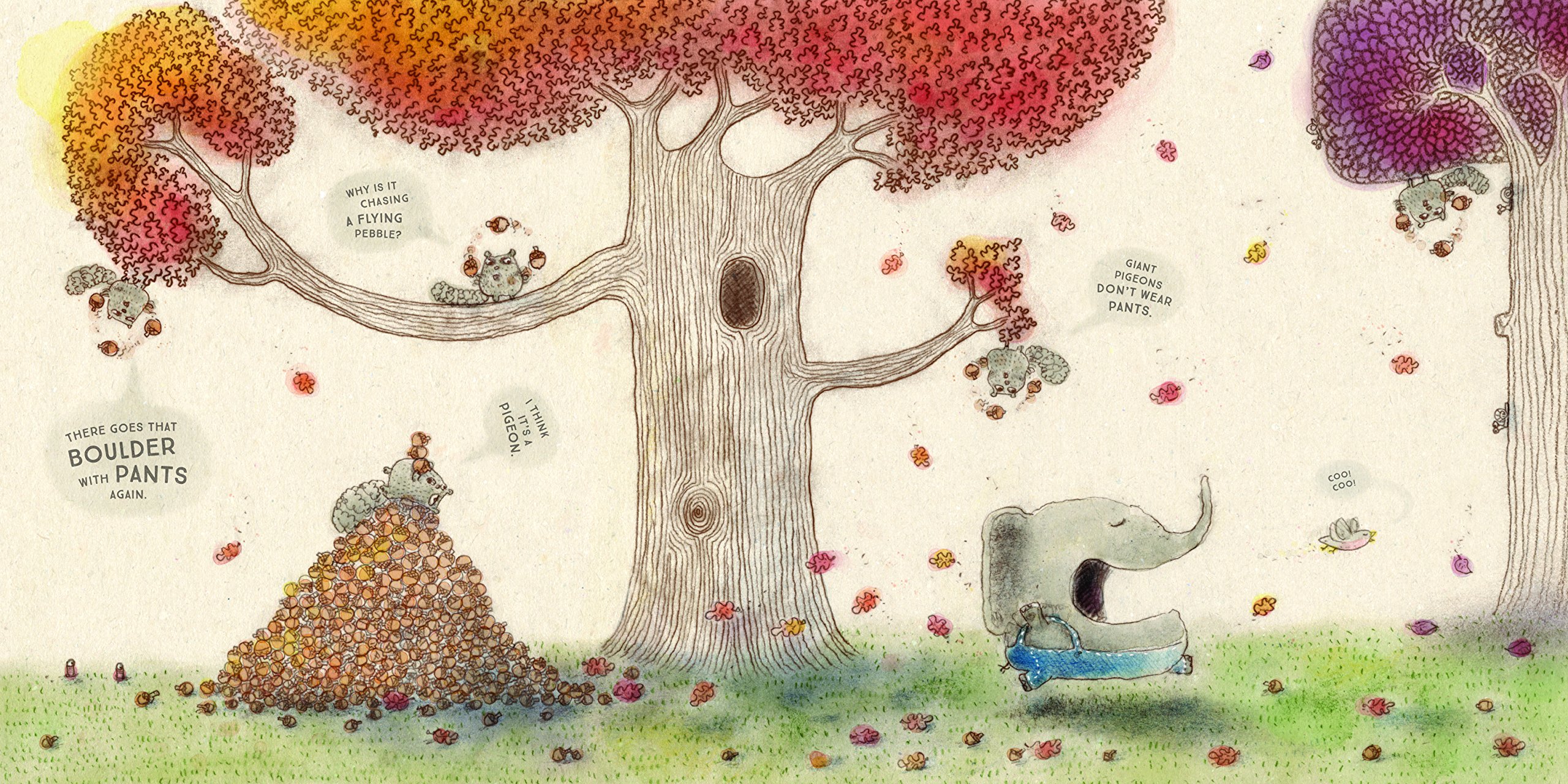 He soon figures, maybe he is not a boulder, but something else that is gray and doesn’t wear pants. Maybe he is something else that responds to his “knock, knock.” He pursues different potential possibilities with similar disappointing results. How hard can it be for an overly enthusiastic, pant-less elephant child to find out who or what he is? How hard could it be to find a willing participant in his word game of identity? Maybe not as difficult as it seems at first. 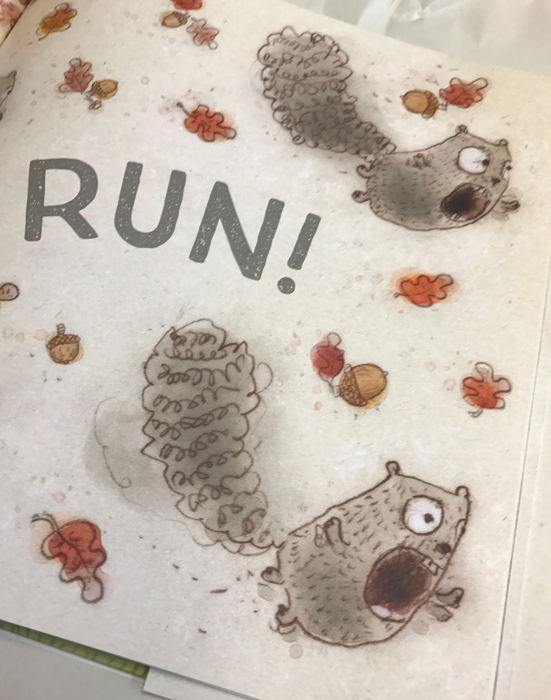 This is such an absurd story (in the best possible way.) It is a roller coaster of emotion—carefree, disappointed, happy, sad, joyful, repeat. The peripheral characters and their commentary are hilarious. Owls that confuse Pete with a cloud—a walking cloud! Squirrels that think he is a hungry, tree-climbing, talking boulder. 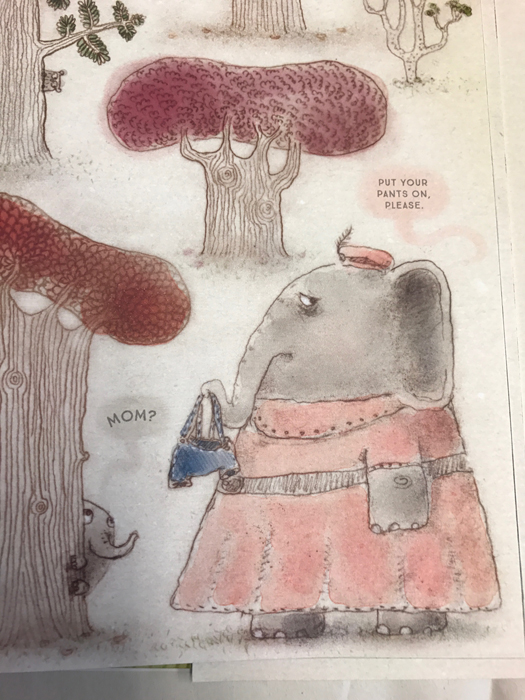 Watkins illustrations are—and this is not the right word but I can’t think of the right word at the moment—whimsical. I became a big fan of his work in Rude Cakes a couple of years ago. They are loose and free (kind of like Pete) and full of life, whether exuberant or woeful. Every being in this book (including the boulders) is endearing and squeezable and laughable.

Even the worms on the back cover who have trouble figuring out who is what when they spot the barcode. 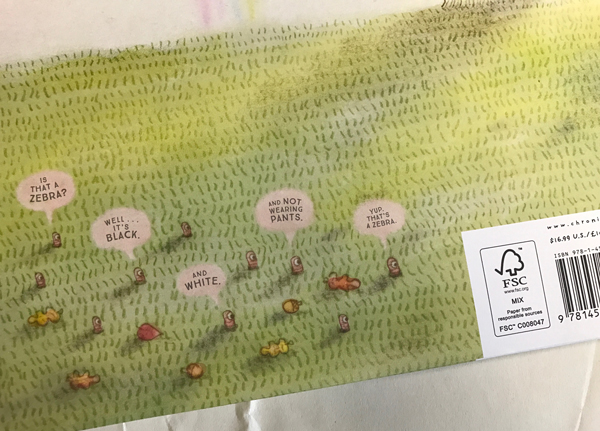 This is a fun joyous read, go find it now and enjoy it— pants on or off.