Home Uncategorized HOW TO CODE A SANDCASTLE, interview with Josh Funk + a giveaway!

HOW TO CODE A SANDCASTLE, interview with Josh Funk + a giveaway!

When I saw the cover/title of Josh Funk’s HOW TO CODE A SANDCASTLE, I knew I had to get a look. Because I’m a coder? No. Because I’m so not. And, guess what? After reading this one little powerhouse book, I could actually understand coding, albeit in a very basic way. An impressive feat! 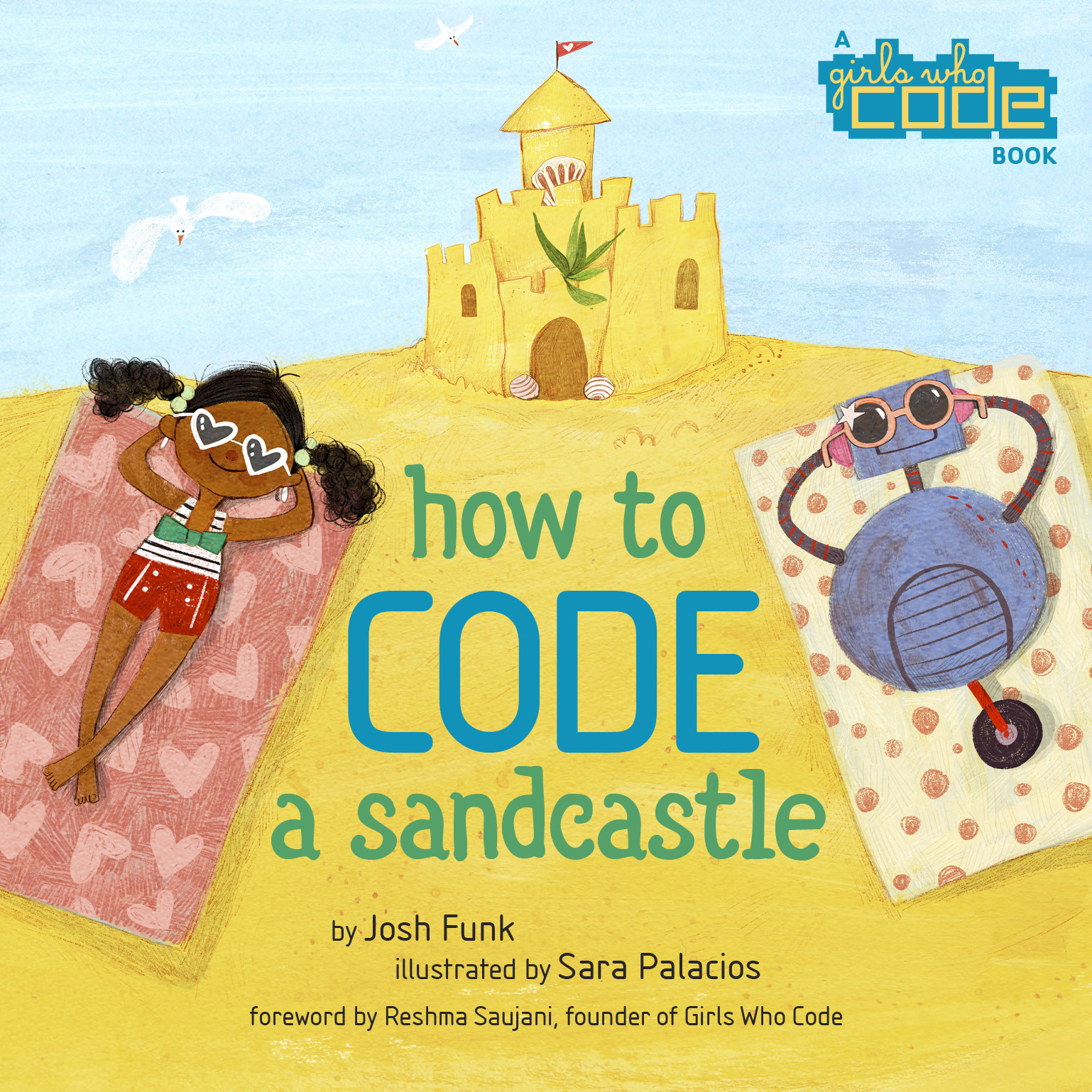 What I love about this book is that it takes a complicated concept and makes it comprehendible (and fun!) for kids (and adults with no clue). Text and art complement one another to create a wholly cohesive and enjoyable book that will fascinate kids. The book is part of Penguin’s new Girls Who Code series, which means we can look forward to more coding books to inspire and educate. Yay!

So of course I wanted to ask Josh about the book’s creation. Luckily, I have a platform for that.

JE:  Welcome to Picture Book Builders, Josh! I love the simple, step-by-step breakdown of coding in your HOW TO CODE A SANDCASTLE. Makes a complicated concept seem straightforward and achievable. What triggered this project? 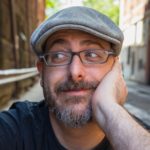 JF:  Thanks for inviting me, Jill! I’m a software engineer. I’ve been working in industry for almost 20 years. About seven years ago, I started writing picture books. But it wasn’t until 2015 that it occurred to me to try and connect my two passions.

I’ve never written nonfiction, and frankly, HOW TO CODE A SANDCASTLE isn’t nonfiction – it’s “Informational Fiction.” As far as I know, we don’t yet live in a world where we can direct robots to build sandcastles with step-by-step instructions.

When I finally had a story that worked in the picture book format, my agent and I began submitting it to editors, one of whom was my editor at Viking/Penguin that previously published DEAR DRAGON. While it wasn’t public knowledge at the time, Penguin and Girls Who Code had entered into a partnership to publish several children’s books about coding (chapter books, activity books, nonfiction). When they saw HOW TO CODE A SANDCASTLE, they connected the dots and invited me to join the program. And of course I was thrilled to do so. 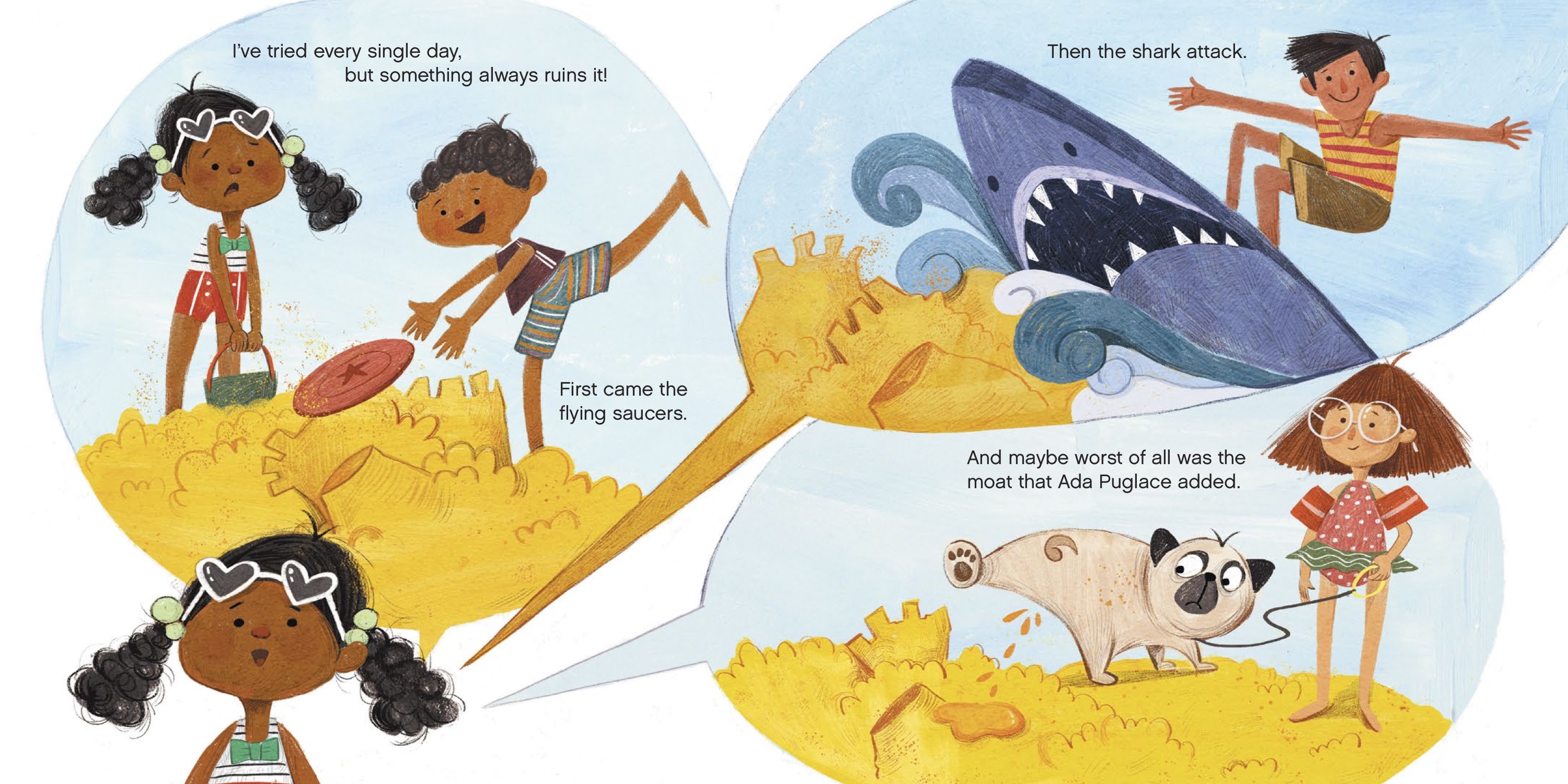 JE:  Readers, artwork above is the spread showing MC Pearl’s failed attempts at building a sandcastle, prompting her to code a robot to do it. Josh, do you do a lot of coding?

JF:  Pretty much every day. The first time I wrote code was in high school when I learned how to access the back end of some text-based video games on my TI-85 graphing calculator (which I think was some version of the language BASIC). But I didn’t really start coding until college when my first course was taught in the language Pascal (like the robot in HOW TO CODE A SANDCASTLE).

Since then I’ve written mostly in C/C++ and occasionally some Python, Java, and a few other languages. For what it’s worth, I’ve never learned PERL (Practical Extraction and Reporting Language) – which is where Pearl, the main character in the book, gets her name (along with it also being my grandmother’s name).

At this point, I’m pretty sure your readers are bored. So I’ll try to go back to talking about picture books.

In HOW TO CODE A SANDCASTLE, I bring up a few basic coding concepts: Sequences, Loops, and If-Then-Elses (more commonly called Conditionals, which I thought that was a big word for the picture book crowd). But I kept the book coding-language agnostic. You see, just like the area of a circle will always be Pi times the radius squared, every coding language will need sequences, loops, and conditionals. They may call them by a different name (e.g. a loop could be called a ‘repeat’), but every language will have each of those concepts.

Uh-oh. Are you still awake?

JE:  🙂  Did you work closely with Girls Who Code founder, Reshma Saujani?

JF:  I’m very grateful that Reshma wrote a beautiful forward to accompany the book and welcomed me graciously as part of the Girls Who Code team.

But the truth is, I wrote the book on my own and Girls Who Code didn’t come into the equation until the very end. The Girls Who Code team did review the manuscript for correctness and to make sure everything aligned with their teaching principles (it did), but from my perspective it was just like any other picture book submission, working with an editor, and so on.

JE:  A great example of serendipity, Josh. The art in this book plays a HUGE role in making clear the whole concept. Art below shows what happens when Pearl instructs robot Pascal to “find a flat spot away from all dogs and Frisbees.” and realizes she needs to be more specific, as they cannot build in the water or the parking lot. Did you have any input on the illustrations, Josh? 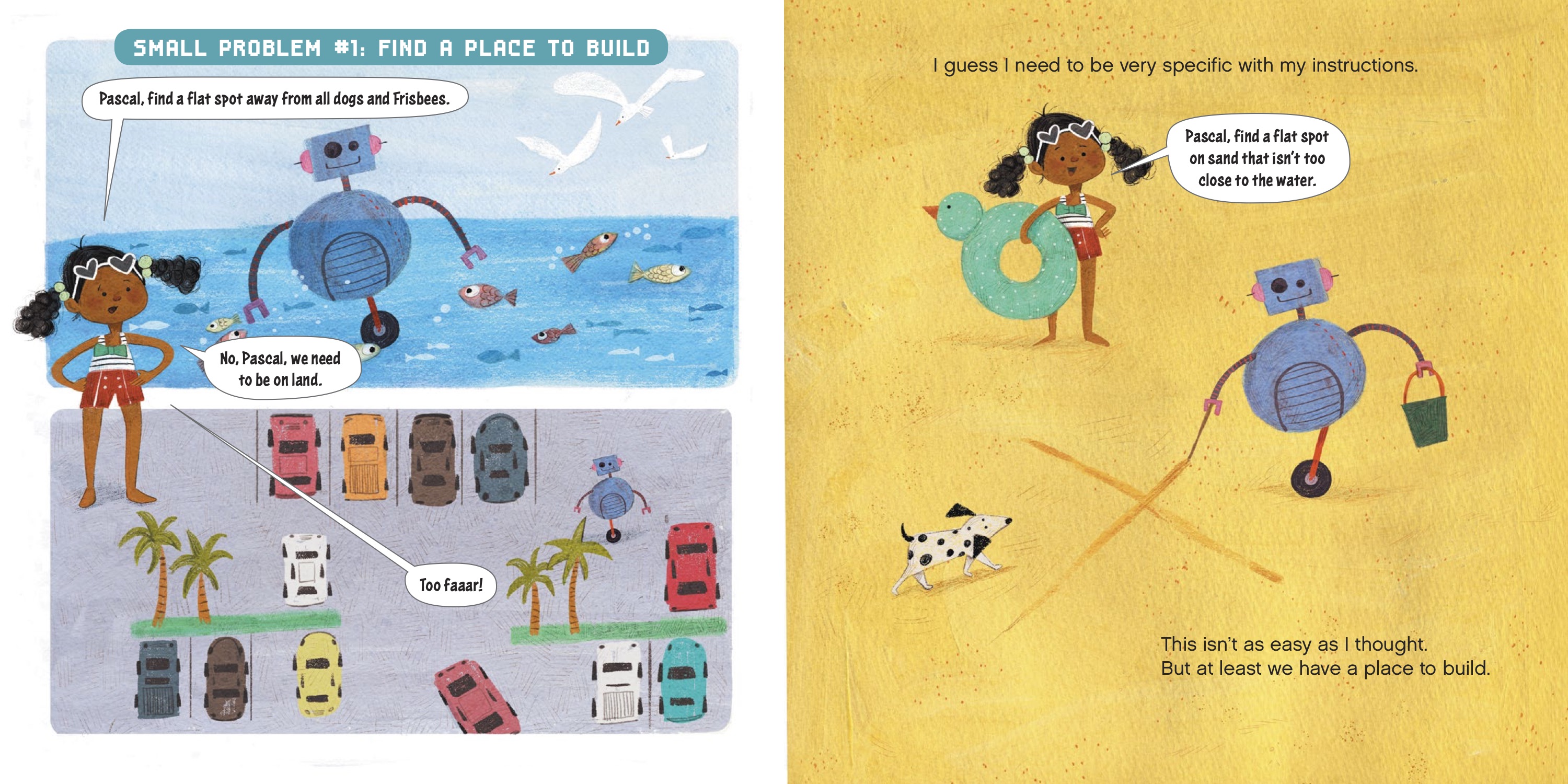 JF:  I certainly had some input, especially regarding the visual gags of the earlier sandcastle mishaps (like Ada Puglace’s moat), as well as when Pascal misinterprets Pearl’s instructions.

But how the coding concepts are visualized – like Pascal’s repeated actions, putting the actual text in a loop around floaties and moats, and all of the multiple different font types and designs (I think there are at least four types of fonts!)? I didn’t really think about it. That was all Sara and the art team. I’m sure it was a real challenge to figure out how to get it all down on the page, but they managed to do it brilliantly!

And Sara Palacios’ illustrations are perfect! I couldn’t have hoped for anything better. 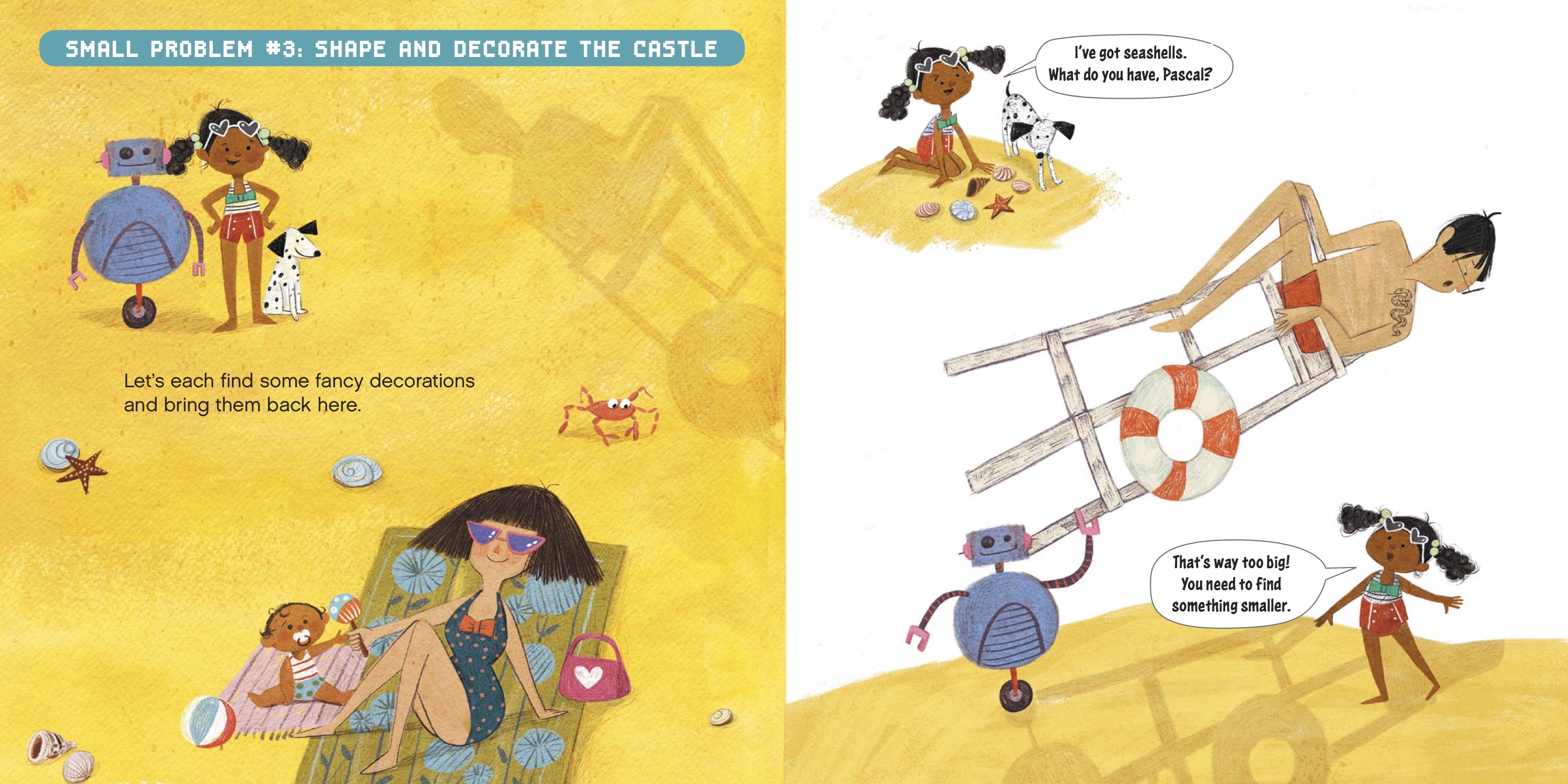 JE:  I agree. She brings the story to life beautifully! On the above page, Pearl has asked Pascal to bring things with which to decorate their sandcastle – but has forgotten to specify that those should be SMALL things. What was the most difficult part of the writing process, Josh?

JF:  Figuring out how to boil down what could be a very complicated topic into something digestible by a picture book audience – all while making a picture book that would still be entertaining even to those who have absolutely no interest in coding. Ideally, you can look at HOW TO CODE A SANDCASTLE as a silly story about a girl and her robot who solve problems, and coding just happens to be the mechanism by which they solve them.

My very first attempt at writing a picture book about coding was about a sister and brother who were sucked into a computer and it became sort of a mash-up of The Wizard of Oz and Tron. They landed in a digital world where they first met a Pointer named Arnie (I don’t know why his name was Arnie) and eventually traveled through a world of loops and trees and other coding termInology before culminating with a faceoff against a pair of witches named Iffie and Elsie … and WOW it was complicated. It was hard enough to understand the massive world I’d built, let alone learn any coding concepts.

Then I thought about using Sir Cumference and the First Round Table as a mentor text. Author Cindy Neuschwander used a child-friendly, familiar world (King Arthur’s England) to explore a relatively complex concept (geometry). Since King Arthur was taken, and I’d already started building a Fairy Tale world (with IT’S NOT JACK AND THE BEANSTALK and more), I considered Greek Mythology, but quickly realized there’s a reason there are no picture books about Greek myths (lots of adult romance and violence).

Next, I tried placing a pair of siblings in a familiar environment – an amusement park. I was getting closer, but the feedback I received from critique partners was that it was still too complicated. So my friend/critique partner/author/social media expert/personal life coach Jess Keating suggested I try approaching it in a ‘How To’ book and have the characters make or build something. And that’s when it all finally clicked.

Note that not all of that early work was wasted – book #2 in the “How to Code” series, coming out in the Fall of 2019, will be called HOW TO CODE A ROLLERCOASTER, and I was able to reuse parts of the amusement park draft, but this time with Pearl and her robot Pascal as the main characters as they focus on the coding concept of variables.

JE:  I wouldn’t be surprised! Hey, this has been really inspiring, Josh. I know we all love hearing how an author keeps at a story until finding the perfect way to convey it. Thanks for stopping by!

JF:  Thanks so much for inviting me, Jill! I expect to see a Picture Book Builders app some time in the next few months!

JE:  Good luck with that, Josh.  😉   Meanwhile, HOW TO CODE A SANDCASTLE releases next Tuesday, so go find it, everybody! Josh has also generously offered to send a book to one lucky winner. All you need do is leave him a comment below. Good luck!

Bio: Josh Funk writes silly stories and somehow tricks people into publishing them as books – such as the Lady Pancake & Sir French Toast series (including The Case of the Stinky Stench and the upcoming Mission Defrostable), ​It’s Not Jack and the Beanstalk, Dear Dragon, Pirasaurs!, and the forthcoming Albie Newton, How to Code a Sandcastle (in conjunction with Girls Who Code), Lost in the Library: A Story of Patience and Fortitude (in conjunction with the New York Public Library), It’s Not Hansel and Gretel, and more coming soon!

Josh lives in New England and when not writing Java code or Python scripts, he drinks Java coffee and writes manuscripts. He’s a board member of The Writers’ Loft in Sherborn, MA and was the co-coordinator of the 2016 and 2017 New England Regional SCBWI Conferences. You can learn more about Josh here, on his website and follow him on Twitter at @joshfunkbooks.————————

WINNER alert!!!
The lucky winner of Kathy Doherty’s DON’T FEED THE BEAR! is Janet Metzger. Janet, if you could please contact me, I’ll make sure you get your copy. Thanks for entering, everybody!