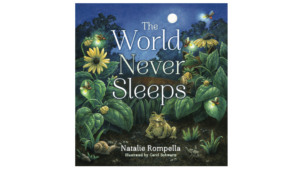 Written by Natalie Rompella and illustrated by Carol Schwartz, THE WORLD NEVER SLEEPS reveals the hidden lives of insects and other small creatures from one midnight to the next. 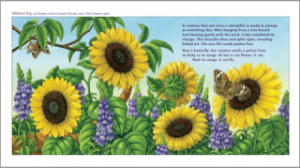 The illustrations are richly detailed and gorgeous! I love how the illustrator included a cat in each spread who is observing nature along with the reader. 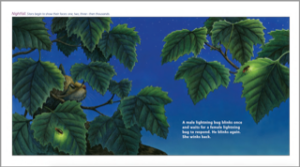 And the lovely, lyrical text is spot on:

Midnight. Stars speckle the darkness with bits of light.

A cockroach skitters across the kitchen floor to snatch a forgotten breadcrumb. In the backyard, a spider weaves an intricate design on the fence. Winged insects dance and flicker in the porch light. 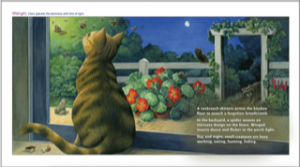 In celebration of this book release, author Natalie Rompella stopped by to answer a few questions about her writing process and research. So here we go!

Would you share a little about how you came up with the idea for the book?

Prior to writing this book, I had read a book to my kids about jobs people do at night, and it reminded me how we sometimes picture the entire world sleeping at night. Around the same time, I used to run past a wooden fence covered with spider webs early in the morning. But they were gone later in the day. I was curious what happened to them. I decided to write about what insects and other invertebrates do throughout the day and night.

Did this story have any surprises or adventures on its path to acceptance?

Three drafts into this manuscript, I was stuck. I had put it in a virtual drawer. But then I was given a grant to attend a Highlights Foundation Nature Writing retreat. I debated between two manuscripts to bring and chose this one. The retreat reenergized me to work on it and see it with fresh eyes.

How did you select the particular insects featured in the book?

I have another informational insect book that came out years ago. Sadly, my spread on mayflies did not make it into that book due to page count. As a fan of mayflies, they were one of the first insects I chose to include in The World Never Sleeps.

Since I live in Illinois, I also wanted all of the arthropods (insects, spiders, centipedes, etc.) to be found in the Midwest.

Although I’ve never been a huge fan of house centipedes, I was intrigued to include them in my book. And when I found there were limited (and mostly negative) sources on them, I just had to include them!

Flies were another arthropod that I wanted to portray in a positive light. As some people aren’t aware, they are pollinators.

You worked with insect experts as part of your research. How did you connect and work with so many experts?

I found my experts in many different ways. I used to work at a nature museum, so I have some connections there. I also belong to a FaceBook group on entomology. I sent out a request for experts and found some that way.

I had many specific facts I wanted verified and needed people with a specialty in a particular arthropod. I contacted universities. I read online scientific journal articles and tracked down the authors. Entomologists who didn’t know the answers to some of my questions gave me the name of an expert who might. 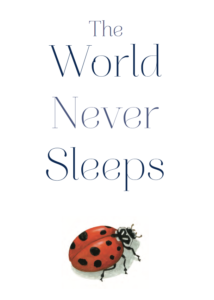