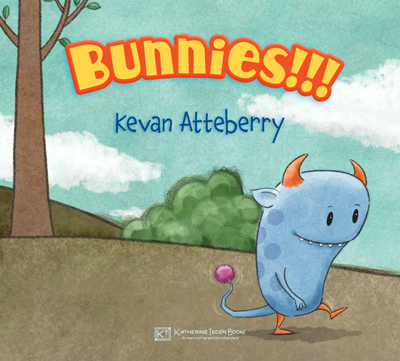 Last week I had a book launch party for my first authored picture book, BUNNIES!!! I have illustrated a handful of books by other authors. Some of them have gone on to win awards. A couple, after six or seven years, continues to sell extremely well. I never had a book launch for any of them. I enjoyed illustrating everyone of them and am proud of them, but I’ve never had a sense of ownership about any of them. They have never seemed like “my” books.  To me, they are the author’s books that I was fortunate enough to illustrate. I know that is silly and that my role in the creation of those books gives me ownership. But I never took the initiative to promote them. I did signings and things that were arranged by the publisher. I participated in events that I was invited to. But I never made an effort on my own to promote those books. In hindsight, I may have done it differently—I don’t know.

Having a book that I’ve written and illustrated, a book that is 100% mine is enormously different. I want the entire world to know about this fabulous little piece of joy I’ve created. And hope they all love it as much as I do. So how do I do it? How do I make my little book stand out among the myriad of other fine books out there? I guess it all starts with a book launch…

The University Bookstore Staff get in the spirit!

I made arrangements with the University Bookstore in Bellevue for the day after my book was released. I sent out invites via evite.com and through social media. And then tapped friends in the enthusiastic and supportive kid lit community who had recently had book launches about what to do next. Of course what I had in mind to do and what I ended up doing were not the same thing. But I think I did all right. I bought thematic snacks; bunny shaped-crackers and bunny-shaped cookies, stereotypical rabbit food (vegetables), and a carrot cake decorated with an image of the characters from my book. 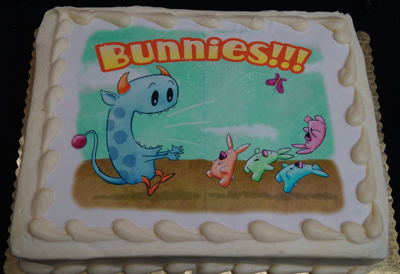 There was even some carrot juice. And wine. I had stickers made and fun, square postcards as giveaways. I had a cutout made of the protagonist made that I thought people might want to get their picture taken with. In the flurry of the evening, that didn’t really pan out, but I still have it and it’s pretty cool, and I will take it with me when I present. And then the bookstore spread very cute plush bunnies throughout the store.

One hundred and some people came to the launch. I gave a very short presentation about where the story came from and showed the development of the main character. 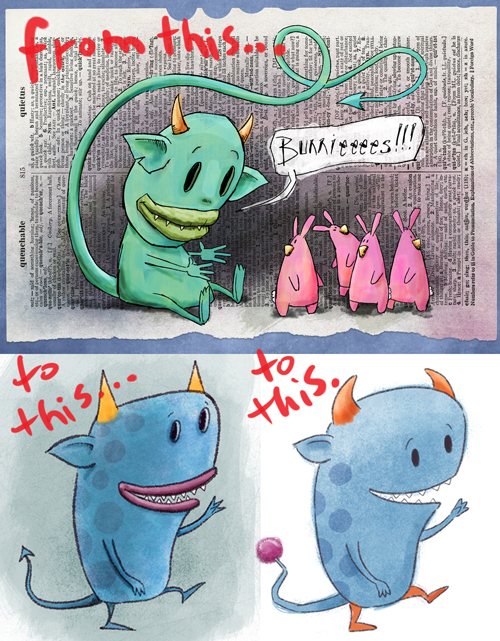 I read the book with a projected PowerPoint presentation so the standing room crowd could see. And then I read it a second time asking the crowd to read it along with me. They did, all 47 words with emotion and enthusiasm. And the final applause assured me that what I had written, what I had illustrated was liked. I welled up a little bit inside. A proud papa of a brand new book. 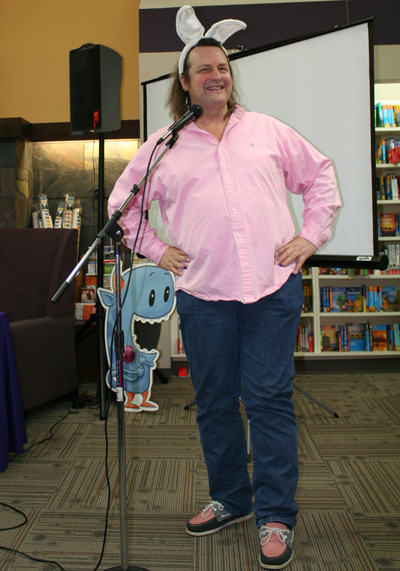 It was a great night. The bookstore sold out their stock of 90 books. I had brought my 23 author’s copies just in case, and they sold out those, too. Some folks bought multiple copies and other folks went home empty handed. But the shelves are restocked now and hopefully they will have to keep restocking.