Home Uncategorized Interview with You Byun (and Book Giveaway!)

Interview with You Byun (and Book Giveaway!) 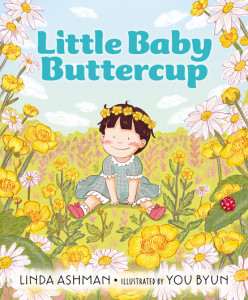 As Jennifer Black Reinhardt put it so well in this post, books take so darn long to make that you’ve got to celebrate them when they’re finally finished. So to celebrate the publication of Little Baby Buttercup (Nancy Paulsen Books/Penguin), I asked the book’s oh-so-talented illustrator, You Byun, to answer a few questions and give us a peek at some early sketches. AND we’re giving away two copies of the book—each signed by both of us—so I hope you’ll stick around!

First, a quick introduction. You Byun burst on the scene just a few years ago, winning both the SCBWI Portfolio Award and the Tomie dePaula Illustrator Award in 2010. Her first book, Dream Friends—which she wrote and illustrated—was published in 2013 (Nancy Paulsen Books). Booklist called it “a visual wonderland,” Publishers Weekly gave it a starred review, and the New York Times said her illustrations “enchant and enthrall and linger in the mind.” How’s that for a debut? 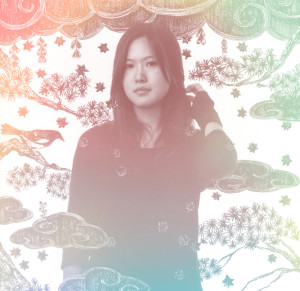 1. You grew up in the U.S., Korea, and Japan. How has living in different cultures influenced your art? I am fascinated by film, animation and books based on fantasy set ups and I tend to draw things that are not based on real life. I think it’s from my experience living in various cultures. In my art, the emotion and mood in my illustrations and storytelling are from my Korean side. The technical drawing side and composition of my storytelling is influenced by the Japanese culture I grew up in. American culture, where I studied illustration in my adulthood, polished the visual language in my artwork. There are many European storyteller/illustrators I love, such as Tove Jansson, Jean-Jacques Sempé, Tomi Ungerer — they have been huge inspirations to me as an artist. My ultimate dream is to have my unique voice in art and storytelling, like they do.

2. You wrote and illustrated your first book, the beautiful Dream Friends. I’m 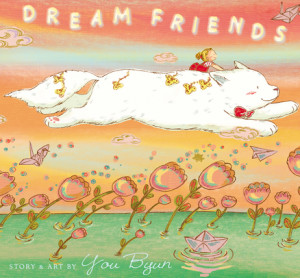 always curious about how stories develop. As an artist, did you “see” the story first, or did you start with the text, or work on both together? I work on both at the same time. I have tried to write first, but I ended up adding a lot of notes describing what illustrations there should be. I am a visual person but I like to make images with stories. Dream Friends‘ storyline itself was inspired by my own experience of moving around a lot when I was little. I had to make new friends whenever I moved to a new place. I wanted Dream Friends to be about the magic of the friendship, the celebration of imagination and dreams which I care about dearly.

3. Was it a different process for you with Buttercup, since you were starting with someone else’s text? How so? It was very different and fun. When I work on my own story, the world forms up naturally because the world is part of the story already. I know what kind of visual language I want to use for it and what kind of characters there will be. On the other hand, when I got the text of Buttercup, I had to understand the underlying stories of the narrative and figure out what the Buttercup’s world would look like. It’s very fun because I don’t have to worry about the story and just focus on making images within the frame I was given. Or beyond. Also, I never have painted a baby before. I would never have written a story about a baby, so working on someone else’s text allows me to explore things I would not have considered otherwise.

4. So many of the scenes in Buttercup (the garden, coffee shop, and park) remind me of our old home and neighborhood in Los Angeles where we lived when my son was a toddler. Did you base these scenes on particular places?  That’s so wonderful to hear! My policy on making art is to make what I love or know. I live in New York so the street scene are vaguely based on brownstone streets in Prospect Heights in Brooklyn and West Village in Manhattan, but I didn’t want it to be obviously New York, so that anyone can relate to the book and feel like it’s their story. To create the background images, I took many pictures of cafes, restaurants, and playgrounds for the book. For example, the cafe which appears in the book is a combination of a bar Hotel Delmano and a bakery called Bakeri in Williamsburg (both are my favorite spots, you should try both places when you are next in Williamsburg). [Check out the links—later, not right now!—they look fantastic, don’t they?~LA]

5. I love seeing how an artist’s work evolves from rough sketches to the final art. Can you share some sketches that show how a particular scene or character changed over time?

1) First I showed Nancy Paulsen (editor) and Cecilia Yung (art director) characters with different age groups, because I wasn’t sure how old Buttercup was. 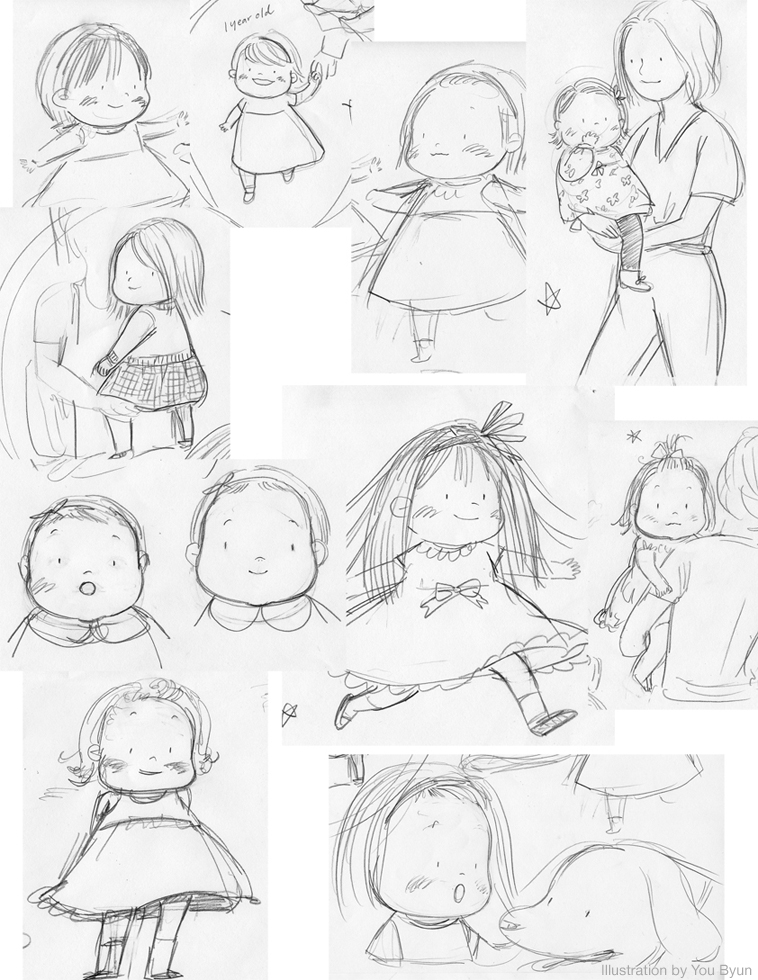 2) Once the age of Buttercup was decided, I presented different hairstyle and outfit. We all liked the short hair. 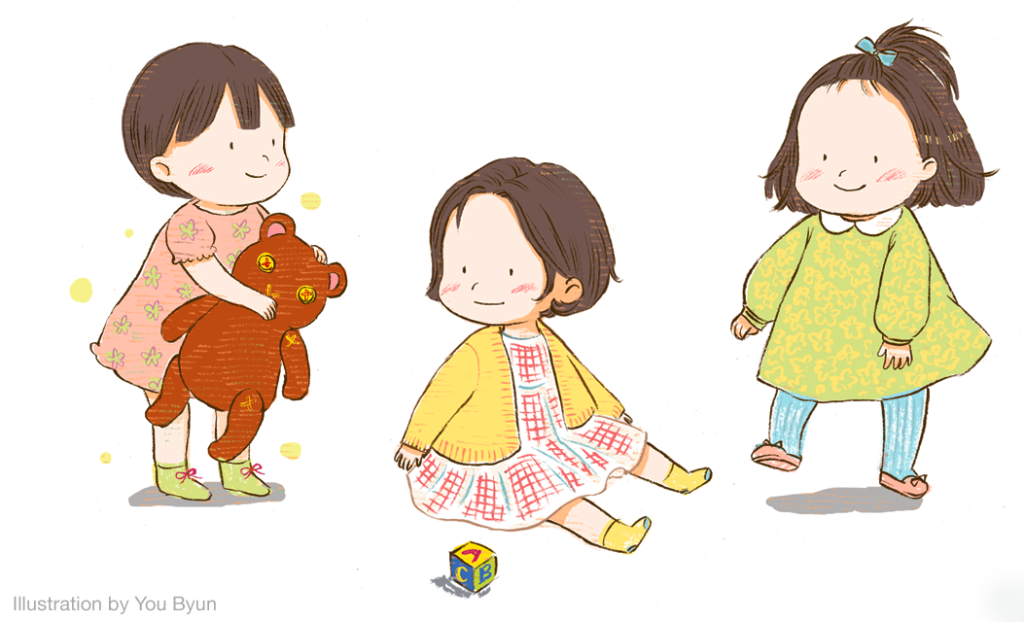 3) Then I showed different color options. (Buttercup could have been a blondie!)

Here are some sketches and finals. The coffee shop scene: 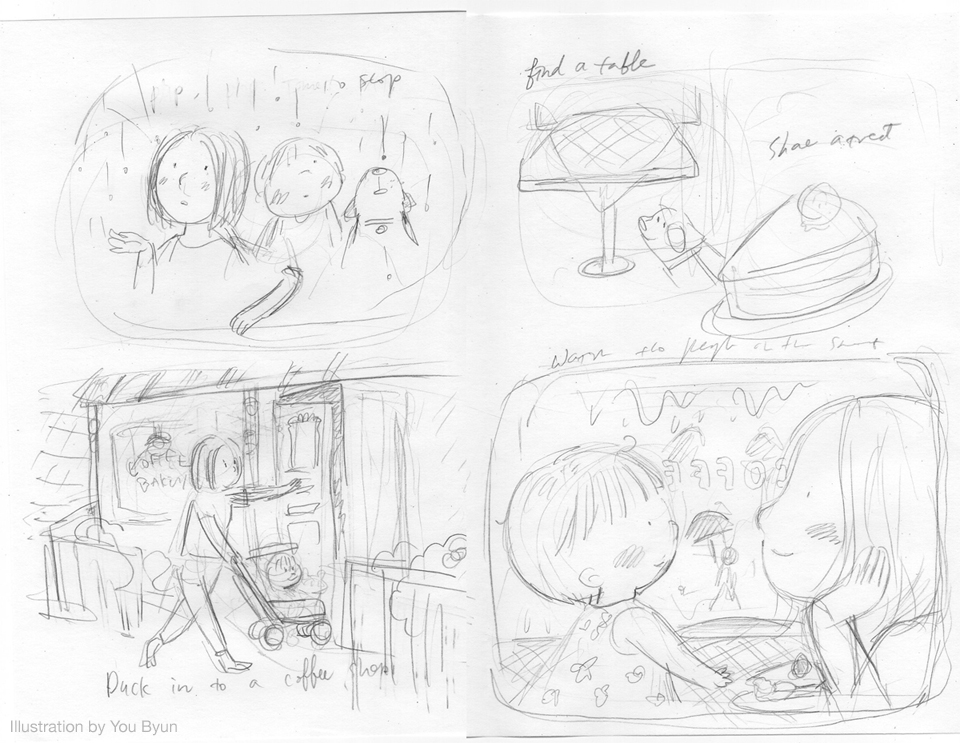 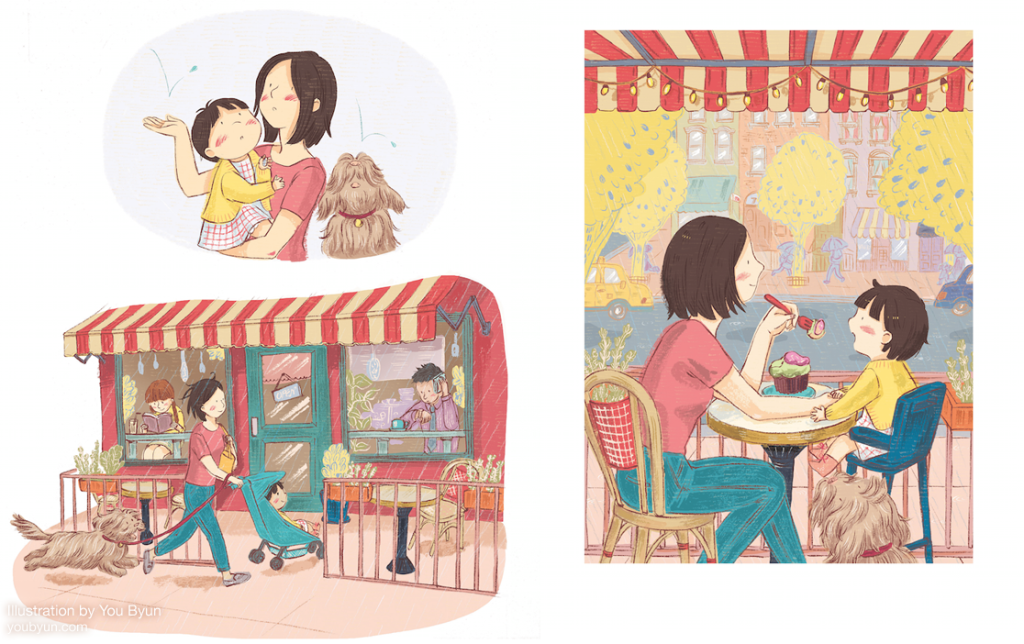 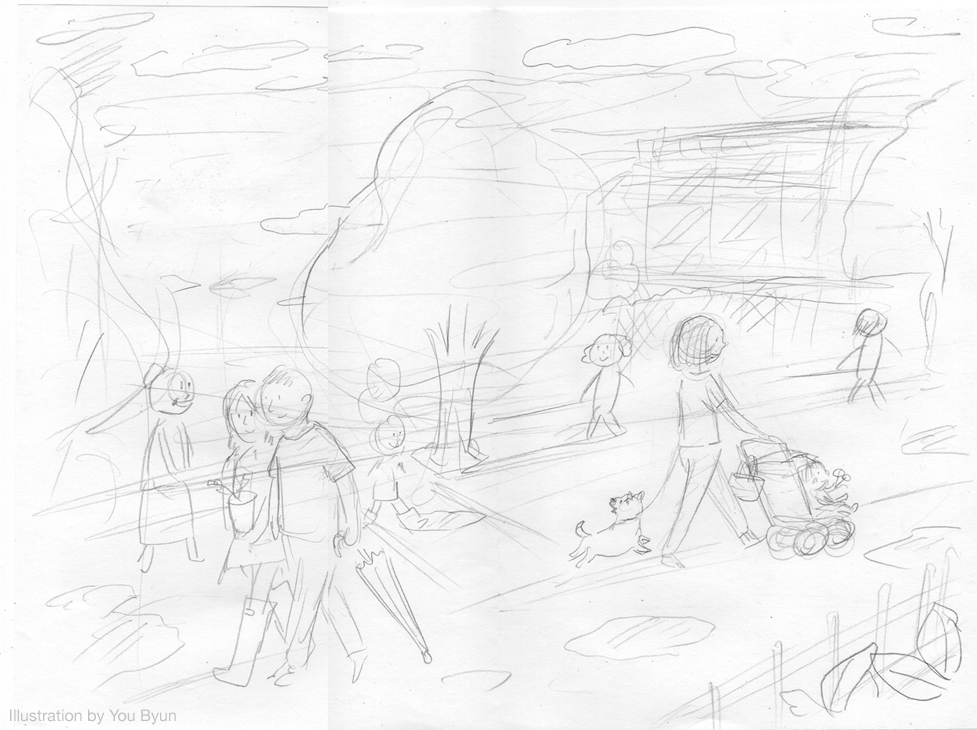 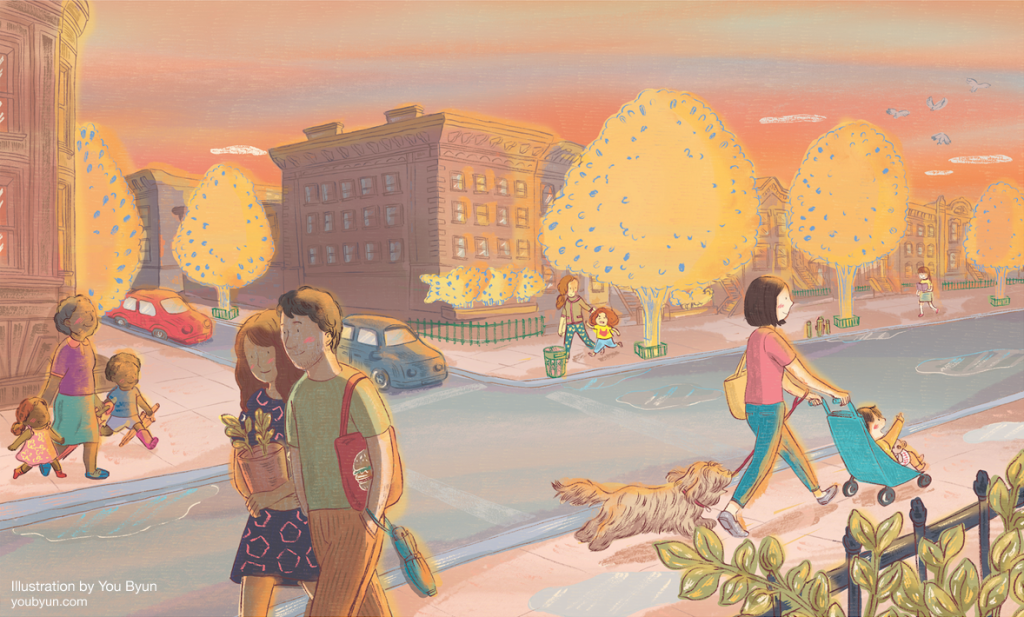 6. Jill Esbaum recently posted about the importance of going to conferences. How did winning the SCBWI Illustrators’ Portfolio and Tomie dePaola Illustrator Award affect your career? And what advice do you have for illustrators who are just starting out? I got to have meetings with amazing art directors in major publishers after winning the awards. It helped me to have my name out there and definitely helped my career. Being in a community is very important to me as a freelance artist who often works alone at home. Everyone is there for the shared interest and the energy coming from the same minds is incredibly inspirational. I would go to SCBWI every year if I could. It’s one of the easiest ways to meet people in the industry, who are actually open minded to meet and discover new illustrators. If you are starting out, go to the conference and meet people. And send out promotional postcards regularly.

7. What are you working on next? I am making my 3rd book with Nancy which I am writing and illustrating, and the story will be set in somewhere between surreal world and real world. I am collecting nice names for it. I will be also teaching a Children’s Book illustration portfolio class in Skillshare.com on February, follow me @youbyun (instagram, twitter) for the update on the launch!

Thanks for visiting, You!

To win one of two copies of Little Baby Buttercup—signed by both You and me—just leave a comment below by February 15th. I’ll announce the winners (chosen at random) in my next post in a few weeks. (If you’re a Goodreads member, you can also enter this giveaway.)