I’ve found a new superhero to adore. His name? 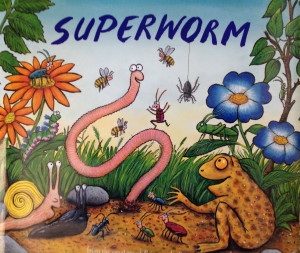 Superworm. His kooky rhyming story is written by Julia Donaldson, illustrated by Axel Scheffler.
Most character-driven picture book stories follow a traditional format:
a) Main character has a problem (or goal)
b) Things happen, repeatedly, to keep him from solving the problem (or reaching his goal)
c) After much struggle, he finally overcomes the obstacles,
d) solves the problem (or reaches his goal), and
e) learns or grows because of his struggle.
That’s okey-dokey, well and good. But I like finding stories that break the mold, too, and still work. This is one of those.
Superworm is a terrific neighbor. He’s always there for his friends, ready to help others at the drop of a hat. Your baby toad hops into the street? 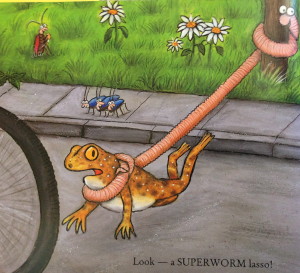 Never fear, Superworm’s here! He also cheers up bored bees and saves a beetle who has fallen down a well. His friends appreciate him, too. They even make up a little chant to honor him:
“Superworm is super-long.
“Superworm is super-strong.
“Watch him wiggle! See him squirm!
“Hip, hip, hooray for SUPERWORM!”
The guy’s got it made. So what goes wrong? Trouble shows up in the form of the Wizard Lizard. 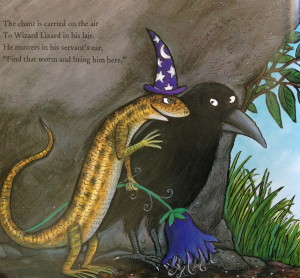 When he hears the chant, he’s intrigued. He sends his crow out to snatch up poor, unsuspecting Superworm. The wizard puts a spell on Superworm, who must do the wizard’s bidding – namely, tunnel in the dirt to find him treasure. And if he fails? Crow food! Bwa-ha-ha.
So one of the BIG rules in writing for children is that the main character must solve his own problem, right? Except in this story, Superworm doesn’t. He’s under a spell, after all. Instead, his friends come to his rescue. 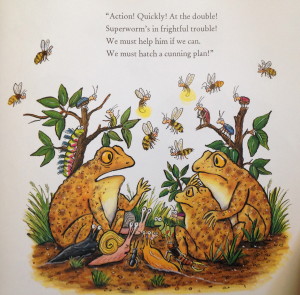 Why does that work? Only because Donaldson has already SHOWN readers what a selfless sweetie pie Superworm is. He’s been such a great friend to everybody else, OF COURSE those friends going to band together to save him when they learn of his plight. It isn’t easy, but those wimpy looking snails, caterpillars, spiders, bees, and beetles are a formidible force when they work together. Watch out, lizard. 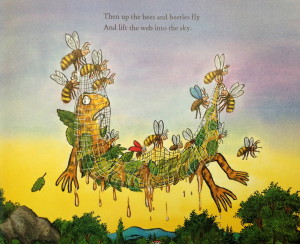 Superworm, free at last, goes right back to his helpful ways. And those, you just have to see. Here are a few: 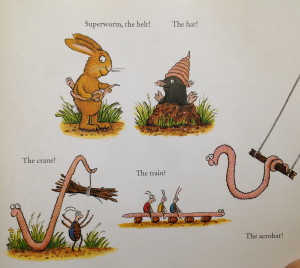 It’s always fun to break a rule now and then. But only if you know what you’re doing.  🙂 And Julia Donaldson definitely does.
Check it out!