I love hearing people’s path-to-publication stories. I mean, who doesn’t love a tale of struggle, heartache, and resilience in overcoming steep odds?

So when my friend Susie Wilde—writing coach, teacher, and Kid Lit Ambassador Extraordinaire—told me her student Lucy Rozier recently had her first book published, I knew I wanted her to visit us here to share her story. 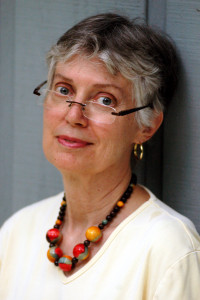 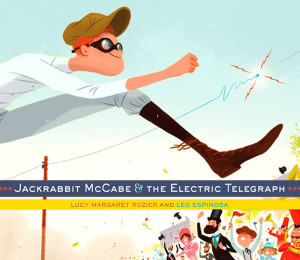 The story—a tall tale with historical roots—pits the super-speedy young Jackrabbit against the new-fangled telegraph in a race to see who can deliver a message quicker.

Sure, there’s action and drama. Sure, there are those fantastic illustrations by Leo Espinosa. There’s even an informative Author’s Note and a Morse Code message to decipher at the end. But it’s the narrator’s voice that pulls you in from the very first page:

“This here’s the story of Jackrabbit McCabe, who was born to run. At birth, his legs were so long, they looped like a pretzel and his father had to add an extra axle to the baby carriage.”

The book is full of such folksy language and humor.  For example, Jackrabbit is called upon when messages need to be delivered fast: ” . . . like to fetch ol’ Doc Dobbins to patch up some ninny from the Double Dare Ya Club, who fell while climbing up St. Bertha’s Church steeple.”

And when the boy inevitably loses to the telegraph? “Jackrabbit felt lower than a snake’s navel.”

So how did this book come to be? I’ll let Lucy tell it in her own words:

LUCY: In the winter of 2011, I discovered Susie Wilde’s wonderful beginning course at the Carrboro ArtsCenter called, “I Always Wanted to Write a Children’s Book.” Well, yes, I did! So I promptly signed up. The first night of the class, I apologized for being an artist, not a writer. But this was not a problem for Susie—she handed me a license to write and said “Now you are a writer.” And magically, I began to write!

A license to write. Don’t you love that? And it worked! The following year, Lucy attended the Carolinas SCBWI Conference where she submitted the story—then titled Rocket Run—for a “First Pages” read. Here’s what happened:

LUCY: The stories at the First Impressions panel were mostly YA, about teen angst, dead parents, and vampires. The mood in the room was getting darker and darker. Suddenly the MC began reading my story and the audience erupted in laughter at all the silly spots—it was pure comic relief.

Susie Wilde had told me the story was finished so not to come home without an agent. I had spotted an agent that I thought maybe I could talk to. So I approached her the next morning and blurted, “I wrote Rocket.” She said, “I’ve been looking for you.” It still gives me chills!

The agent, Liza Voges of Eden Street, signed Lucy up and sold the manuscript to Schwartz & Wade. And now—voila!— this beautiful book. I asked Lucy if she had any advice to share from her experience.

LUCY: I think my story got in under the “be unique” rule. I was very sure of the narrator’s voice—I had heard it in my dreamtime writing when I heard the first line.

LUCY: I love to write in the morning, just as I barely wake up, staying in right brain mode, as when making art or dreaming. Sometime wisps of dreams remain enough for stories to form and I write without looking at what I write.  I can’t yet look at the clock or think about the sadness in the world or my left brain would take charge and shut creativity down. Don’t give that critical left brain an inch!

What is also particularly helpful to me is my critique group of many years through Susie Wilde. Jackrabbit McCabe and the Electric Telegraph wouldn’t have happened without Susie’s belief in me. So get into a smart, truthful, group, believe what they say, and go to SCBWI conferences.

Excellent advice, no? Thanks so much for visiting us, Lucy! Check out the book, folks. And visit Lucy here and Susie here.

The Kidlit Auction for John and Betsy McLeod is now open! Interested in a critique from an editor or agent? Or maybe a writer’s retreat? How about signed books from some favorite authors (and a Big Ole Box of Books from me)? The funds raised will help Betsy—a children’s book author—and John McLeod pay some of the expenses associated with John’s recent ALS diagnosis. Bidding ends March 30th—please visit and please spread the word!

The winner of the Henry Wants More! giveaway is Claire Annette Noland. Thanks so much for all the nice comments. Always great to hear from you!