Researching J.R.R. Tolkien and His Dragons 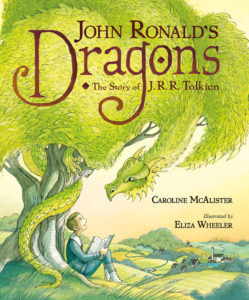 Last year, I shared this post while in the thick of final art for the picture book by Caroline McAlister, JOHN RONALD’S DRAGONS: THE STORY OF J.R.R. TOLKIEN (Roaring Brook/MacMillan). This month, on the 21st of March, the long-awaited release of that project will be here! I can’t wait to share it with you all. A little from the publisher:

“John Ronald loved dragons. He liked to imagine dragons when he was alone, and with his friends, and especially when life got hard or sad. After his mother died and he had to live with a cold-hearted aunt, he looked for dragons. He searched for them at his boarding school. And when he fought in a Great War, he felt as if terrible, destructive dragons were everywhere. But he never actually found one, until one day, when he was a grown man but still very much a boy at heart, when he decided to create one of his own. John Ronald’s Dragons, a picture book biography by Caroline McAlister and illustrated by Eliza Wheeler, introduces the beloved creator of Middle Earth and author of The Hobbit to a new generation of children who see magic in the world around them.” 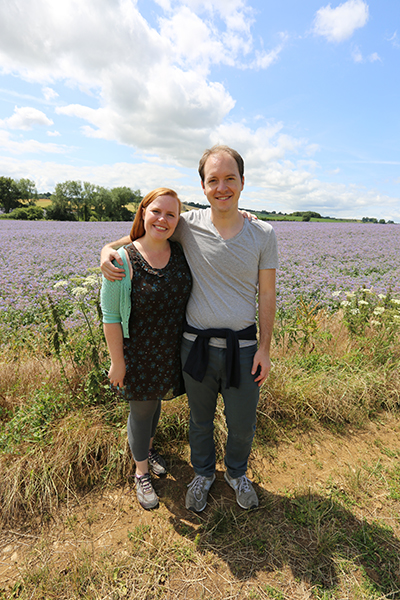 I LOVED working on this book, so much so that I wished I could have spent a solid year on the research alone (and while we’re dreaming, another year just for painting!). Even without that kind of time, I did fit in as much reading and researching about Tolkien’s life as I could while in the midst of concepting, sketching, inking, and painting. But when I began reading literature on Tolkien (I highly recommend J. R. R. Tolkien: A Biography, written by Humphrey Carpenter), I kept feeling the need to see the locations for myself. Tolkien lived primarily in Birmingham and Oxford, England. The practical side of me thought that probably all the info I’d need could be found online, but the creative side in me pushed and prodded, and I decided to invest a chunk of my book schedule time and a hunk of money on taking the trip there for research. And I’m SO glad that I did! My husband Adam helped me put together our itinerary and travel plans, and we spent three weeks traveling in and around Birmingham and Oxford. Here are just a few of the many research highlights from our trip.

When Tolkien was a boy, he spent some idyllic years in Sarehole, a village about seven miles outside of Birmingham. Today, the “village” has been completely engulfed in Birmingham’s sprawl, but it was wonderful to see that many key areas have been preserved, including the large Moseley Bog, which is thought to have inspired Tolkien’s forests. The flour mill is still working and houses a small Tolkien museum (he paid to have Sarehole Mill restored), and the cottage that he lived in sits nearby. 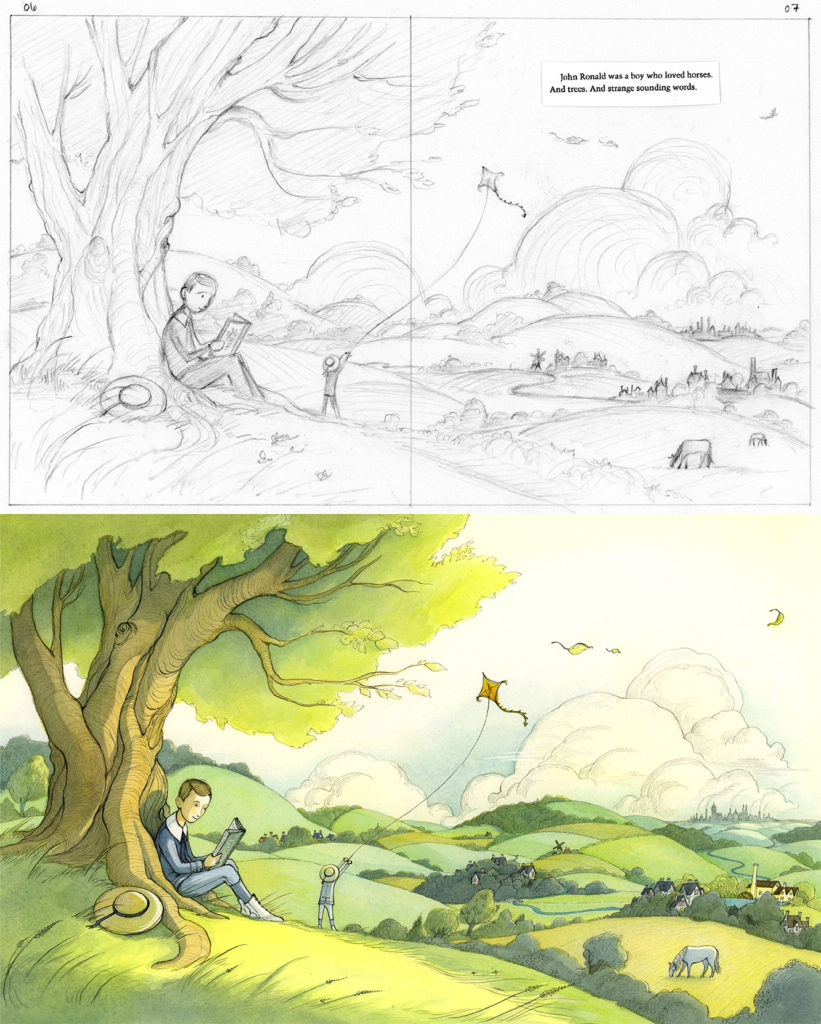 THE ORATORY AND “TWO TOWERS”:
There were many instances where being in the real locations influenced my approach to the artwork. When their mother died, Tolkien and his brother moved from the beautiful countryside into the industrial neighborhood of Edgebaston in Birmingham to live with an aunt. In the neighborhood stands the waterworks tower, and the tower of Perrott’s Folly, which are thought to have inspired the title for the second book in THE LORD OF THE RINGS trilogy. After seeing the towers, we tracked down the aunt’s house, and I realized how close they were to each other. In that moment, I knew I had to add the towers in the background of the page showing John Ronald and his brother arriving at the aunt’s house. 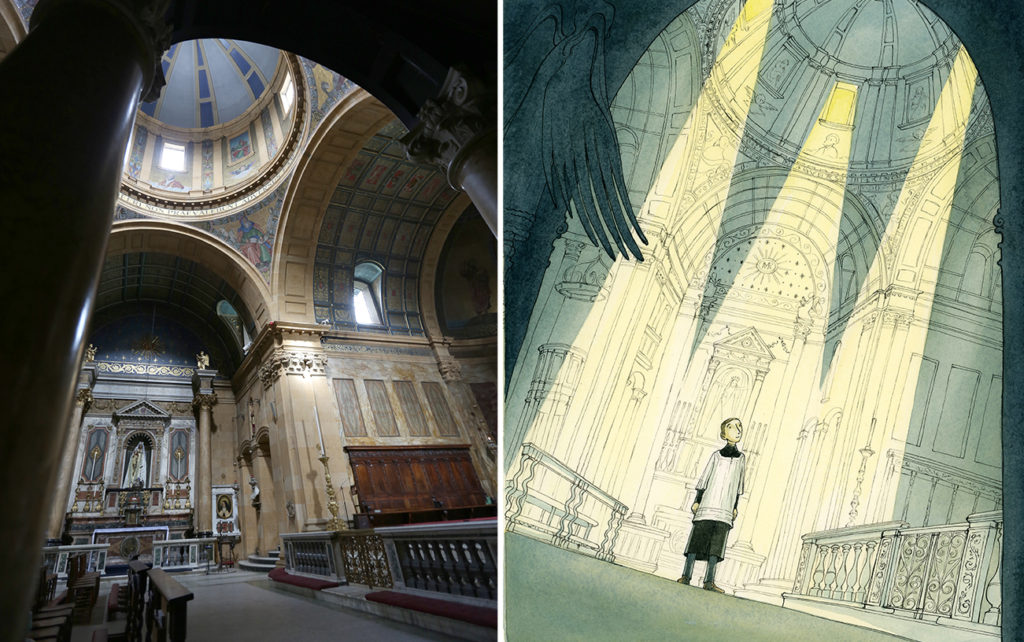 Tolkien was an altar boy at the nearby Oratory, where his guardian, Father Francis Xavier Morgan served mass. I was able to directly use this photo, which we (discreetly) snapped inside while visiting, to create the image for this page. I’m not sure I would have thought of this angle had I not been there in person!

TOUR OF THE OXFORD COLLEGES:

The visit to Oxford was especially inspiring — we were able to hire a guide who could tailor a tour specifically towards Tolkien’s time as both a student and then professor there. I squeezed some key landmarks into the artwork; the Bodleian Library, the Bridge of Sighs, and the Sheldonian Theatre. A Tolkien-centered visit to Oxford could not go without a meal at ‘The Eagle and Child’ pub, where Tolkien met with his writing group ‘The Inklings’ (which included his friend, C.S. Lewis) on a regular basis.

Perhaps the most inspiring moment was seeing Tolkien’s original jacket illustration (he was a talented artist, as well as an author!) for the first edition of THE HOBBIT in an exhibit at the Bodleian Library: 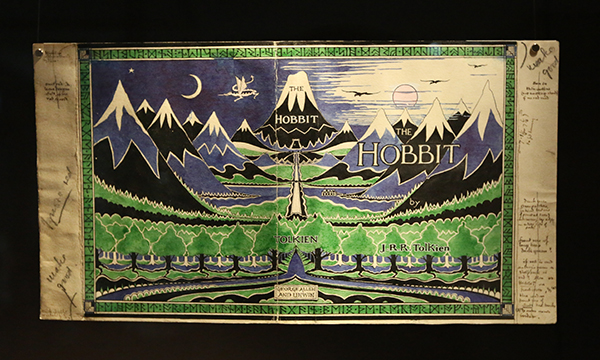 There were so many moments, pieces of information, and details from this trip–and from Tolkien’s world–that inspired me, and I worked to fit as many into the illustrations as I could. Caroline McAlister did a wonderful job of creating a picture book text that highlights the key moments in Tolkien’s life that led to his creation of Middle Earth and its stories. By making a picture book biography about Tolkien, we hoped to create an inspired way to introduce children to this beloved author.  I hope that you will check this book out, and if you like it, please share with your bookstores, teachers, librarians, kids, and all fans of Tolkien’s work! 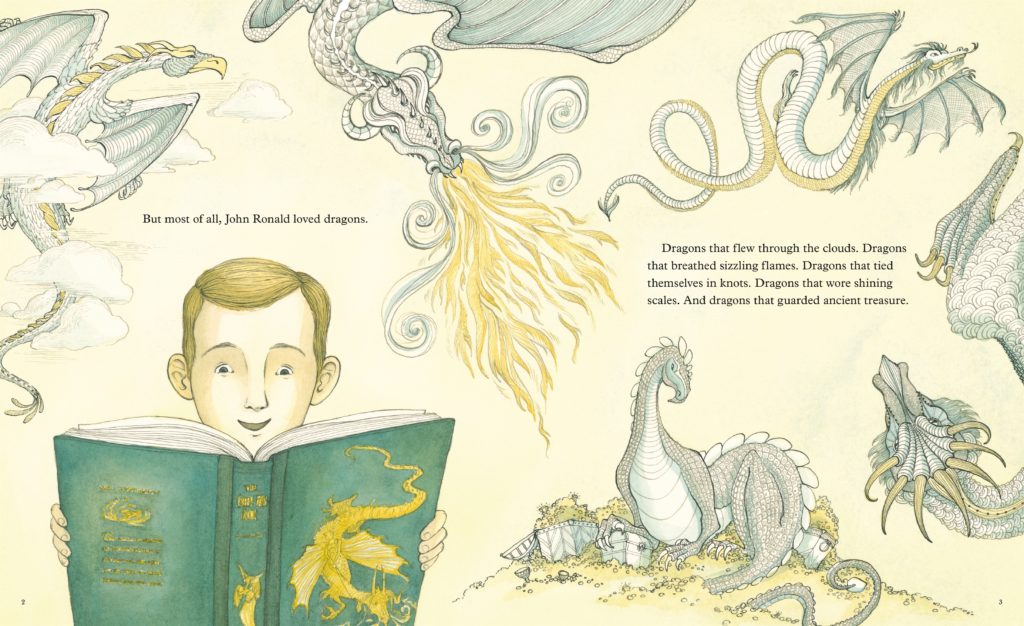