DAD AND THE DINOSAUR dazzles — for readers and writers 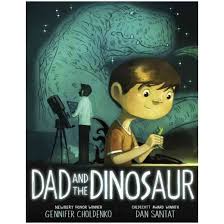 Recurring elements are one of my favorite features in picture books.

Picture books are shorter affairs, so the writer has to fit a plot into a tighter-than-normal space. To make the story hang together and feel like a coherent whole, there often are words, phrases or themes that repeat throughout the story.

They’re like signposts for the readers, to help them say, “Oh. I know this. I’ve been here before.” And, “Ah … so that’s how this all relates.”

But you can’t just repeat any words, any where. Recurring elements are an art rather than a science. Common picture book wisdom says elements should be repeated three times in the story, but the real test is – does whatever the writer did work?

The book is a sweet tale of a boy named Nicholas who’s known for being brave. But … he’s the only one who knows that he’s not brave — at least not without his plastic dinosaur that he keeps in his pocket, his sock or under his pillow. When the dinosaur goes missing, the boy’s father helps him find it  and his own bravery. As a side note, the illustrations are my favorite of all Dan Santat’s work. They are simply superb.

But back to recurring elements.

Choldenko sets up her recurring elements in the book’s first sentence:

Nicholas was afraid of the dark outside his door, the bushes where giant bugs lived, and the underside of manhole covers.

The elements are fun and memorable and also tell you something about Nicholas.  The very specificity of his fears tells you he’s a sensitive kid no matter what he wants the rest of the world to think.

Then we meet Nick’s dad, who apparently isn’t afraid of  anything and Nick’s plastic dinosaur, that helps Nick be brave. Then, Choldenko’s three recurring elements pop up again:

Dinosaurs like the dark, bugs are nothing to them, and they eat manhole covers for lunch and everything under them for dinner.

This reinforces why Nick needs his dinosaur. He can take on Nick’s three worst fears with a swish of his tail. Note the writing here. Even though the elements  are being repeated, the exact words are not. There’s a lot of voice here that moves the story along while grounding it in what’s come before.

So life goes well for Nick. With his dinosaur in tow, he climbs high walls, swims in deep water and scores soccer goals.

But when the dinosaur gets lost at the soccer match, Nick’s fears — and those recurring elements — show up again as Nick goes home without his dino.

The night was as black as octopus ink, giant bugs were everywhere, and their little car was nearly sucked under the street.

Then — BAM — the elements are back on the very next page. Nick goes to bed with the light on, and when he eventually falls asleep, he dreams about bugs and the world underneath manhole covers.

Nick’s dad realizes something is wrong, so they set out to retrieve the dinosaur from the soccer field — even though it’s late at night. It’s a bonding experience for Nick and his dad, and Nick learns it’s OK to be scared

The elements — which already have appeared four times in this story of about 500 words — don’t make another appearance, but the illustrations nod at Nick’s fears as he’s shown outside looking safely at the stars with his Dad and his dinosaur.

If you’re someone who loves picture book structure, go ahead and appreciate the recurring elements. I certainly did.

But read this book even if you just like a good story. Because this book works on so many levels. It has heart, a strong family relationship,  and something kids can relate to — being afraid of things and not wanting anyone to know. The writing is great, and the illustrations are marvelous. I’m not an art critic, but I suspect someone who is could write a laudatory post entirely about them.