Last week a wonderful book released into the world–The Girl Who Named Pluto: The Story of Venetia Burney, written by Alice McGinty and illustrated by Elizabeth Haidle. As a self-professed space nerd, I couldn’t wait to learn how Pluto had been named by an 11-year-old girl! And this book did not disappoint. The writing is sharp, sweet, and incredibly engaging.

Of course, I still wanted to know more. So I invited children’s author, Alice McGinty, to answer a few questions. 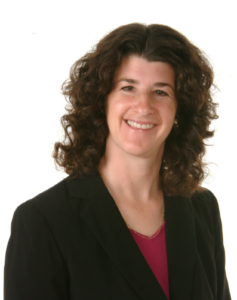 What inspired you to write The Girl Who Named Pluto?

I was doing preliminary research for another space-related project when I saw a short article online about Venetia Burney. The article was only a paragraph, but it immediately caught my interest. An 11-year-old girl had named Pluto!? I’d had no idea, and the thought of it intrigued me so much that I stopped working on the other project and dove into Venetia’s story, finding out everything I could. I had the book outlined in my head within the first few hours, as her story took shape. Then, I took my time to do research, learned everything I could, and find just the right way to write the story. I never went back to that original project!

I felt like a detective as I hunted down sources to help me learn about Venetia and the naming of Pluto. First, I found everything I could online, including NASA interviews with Venetia and an account written by Venetia’s teacher, Miss Claxton, of the planet walk Venetia’s class took.

Next, I took advantage of the wonderful resources at the University of Illinois Library, where I live, as well as my two local libraries. There, I found newspaper articles from the 1930’s London Times and I hunted down articles in magazines, such as Sky and Telescope and Astronomy Now. Two articles had to be requested from out of state libraries, and I was excited when I received the scanned photocopies of them. As I read them, I felt such a thrill when I came across great pieces of information and details which I knew would be perfect to include in the story! One of these great finds, which I had to hunt down and order from England, was a documentary film that was created about Venetia and the naming of Pluto. I also got in touch with a pair of journalists who had interviewed Venetia for a magazine article I’d found. I was able to ask them questions and they were very helpful.

All along I wanted to get in touch with Venetia’s son, Patrick. He was the only family member still alive that I knew of. After quite a bit of sleuthing, I found an address in England that I hoped belonged to him, and I wrote him a letter. By gosh, it took some time, but he wrote me back and answered my questions! 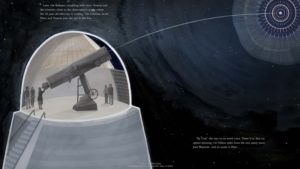 Can you tell us more about the documentary “great find” you mentioned in your last answer?

When I first watched the documentary film made about Venetia and saw the scene filmed on the eve of her 89th birthday, when she’d gone to an observatory on the Southern tip of England and viewed Pluto for the first time through a telescope, I got goosebumps. I knew that Venetia had died at the age of 90, so this was near the end of her lifetime. I love that the experience carries Venetia’s story – and her passion for Pluto – through to her later life, bringing things full circle and making the story feel complete. Portraying this scene would be the perfect way to end her story. I hope that readers get goosebumps as I did when they read about it in the book.

Did you face any special challenges when writing this story?

There is not a lot of information out there about Venetia and I had to do quite a bit of sleuthing to find out what I did. There was information which I couldn’t find at all, such as what happened during the months when Venetia and her Grandfather were awaiting the decision from the scientists at the Lowell Observatory about whether her suggestion of the name Pluto would be accepted. What did she and Grandfather Madan do during the months of waiting? And what was it like when Grandfather told Venetia that the name of Pluto had been chosen? Oh, how I wish I could have been a fly on the wall, watching as this all unfolded. I would have loved to have seen Venetia’s face when she found out she’d named a planet!

However, I couldn’t find this information, and Venetia, her mother, and grandfather were not around to be asked. She hadn’t spoken about it or given any details in interviews, and her son did not know either. So, I did the best I could, piecing together the information I had and then using what I knew about Venetia and her family to fill in the rest, asking myself questions such as, “What would Venetia have felt? What would she have most likely done?” 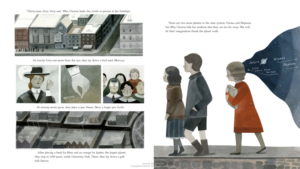 Why do you think the story of Venetia Burney matters?

(Speaking of empowering… when I was beginning as a writer, I held myself back in some ways. For example, since nobody had asked me to travel to do research for my books, I felt I had no right to plan and take research trips. I was waiting for my publishers to ask me. Finally, after attending conferences and hearing other nonfiction authors speak of their experiences, I realized that nobody had asked them either. They’d simply taken the initiative to do what they wanted and needed to do. I had to do the same. I gave myself permission to do what I wanted and needed to do, in order to write the stories which inspired me.)

Three “lightning round” questions for Alice to answer in 3 words or less!

How would you describe Venetia Burney?
Bright, inquisitive, creative
Where will astronauts visit next?
Mars
What planet are you most like?
Bright, spinning Saturn!

Read more about The Girl Who Named Pluto on Space.com 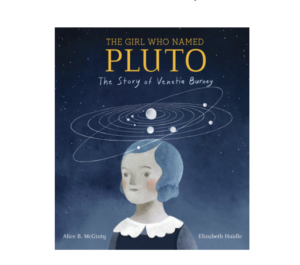