Hi everyone! I’m taking a break from my series about classic PB animal characters so that I can share about my new book, TELL ME A TATTOO STORY (written by Alison McGhee, published by Chronicle Books), which just released this week! YAY!! The illustration journey is unique to each book, and I’m excited to share how it went with this one. 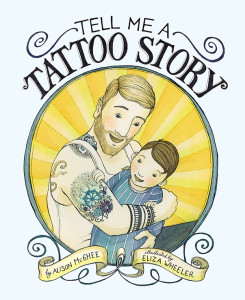 Also, if you’d like, add a comment below for a chance to win a signed copy of this book! The winner will be chosen at random, and I’ll announce the winner on May 13th.

When I got the call from my agent about a picture book manuscript by Alison McGhee about tattoos, you can imagine I was intrigued and excited! A picture book about tattoos? Is that possible? Turns out, yes, it is. In TELL ME A TATTOO STORY, a father tells his little son the story behind each of his tattoos, and together they go on a beautiful journey through family history. There’s a tattoo from a favorite book his mother used to read him, one from something his father used to tell him, and one from the longest trip he ever took. And there is a little heart with numbers inside—which might be the best tattoo of them all. Alison McGhee wrote this story inspired by her own children and their many tattoos.

After lots of inspiration gathering (for this book, looking at A LOT of tattoos!), the first thing I draw for a new story are the characters. My vision for this book was to get all retro with the characters. My thinking was that most everyone who gets tattoos are inspired by the classic tattoos of the early 20th century, so my vision was to infuse the story with some 1950’s flair. 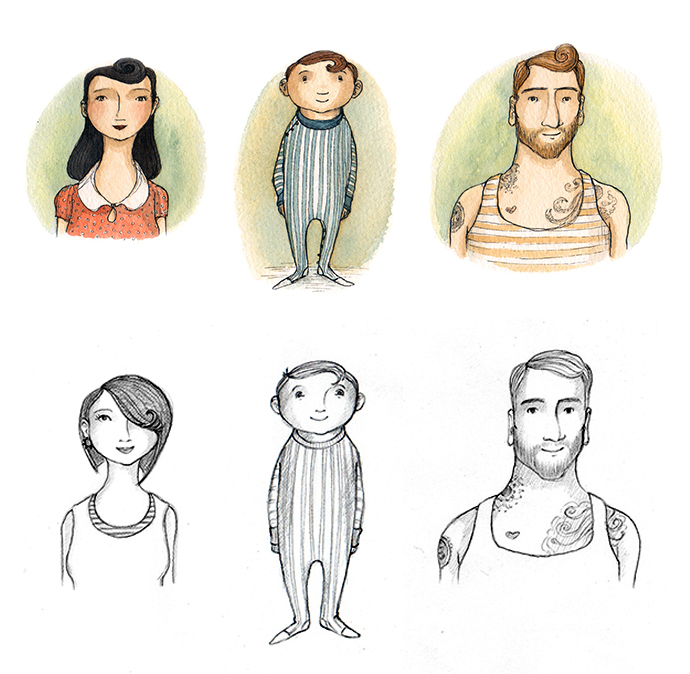 It turned out that Alison’s vision for this book went in a different direction, and she felt it important that the characters be modern-day, blue collar tattooed parents, and that the father also be a war veteran. So I created new character sketches based on that feedback. The characters morphed from retro to present day versions of the same family.

[A quick aside for picture book writers who are saying “What?? I thought authors had no say in the artwork!” It’s true that this is an unusual circumstance. Chronicle Books is unique in that they often keep their picture book authors more involved through the art process, and also this story was a personal one for Alison (an author with major clout!). But generally, apart from these points, over the course of the project I was given free reign to imagine what most of the scenes showed.]

For this book, I had the challenge of trying to figure out how to show a story that unfolds in the present, and also flashes back to scenes that happened in the past. My thumbnail sketch (which is about 1 inch by 2 inches) of this scene shows how I’m thinking of differentiating the flashback by giving it fuzzy edges: 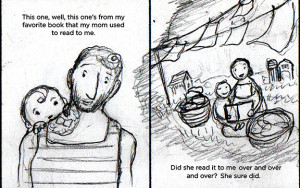 Here’s how the sketch evolved: 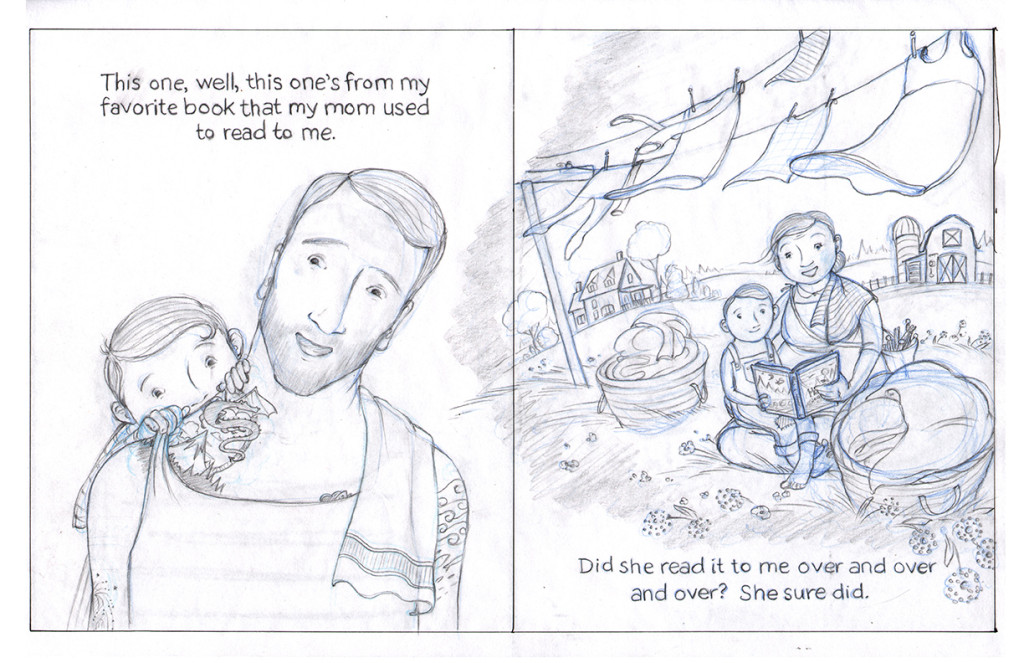 Once all the sketches were developed and approved, I created a color storyboard for myself to figure out how the color scheme would work. To help differentiate the present day moments from the past, I thought I would keep the present day color palette more sparse, and have the flashbacks be bright colors and more fleshed out scenes. 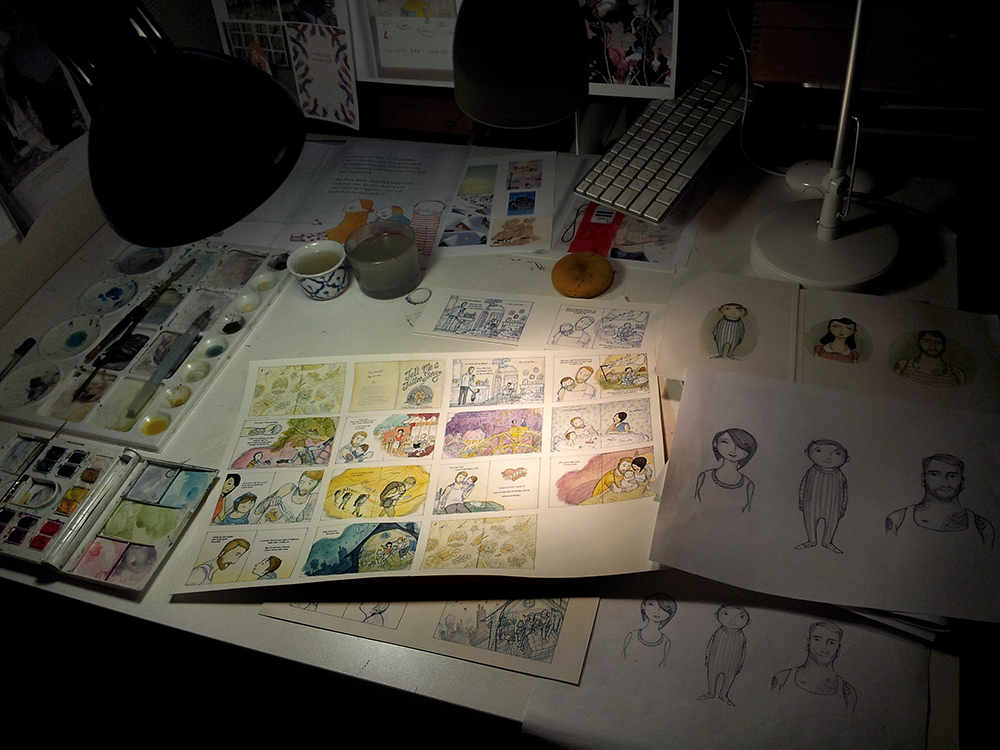 But once I got to painting this first piece, something wasn’t working with the colors I had chosen. Talking it over with my art director at Chronicle, Kristine Brogno, she pointed out that there didn’t seem to be enough of a separation between present day and the memory. I didn’t want to give the memories any sort of border or hard edge, but how could I make it more obvious? 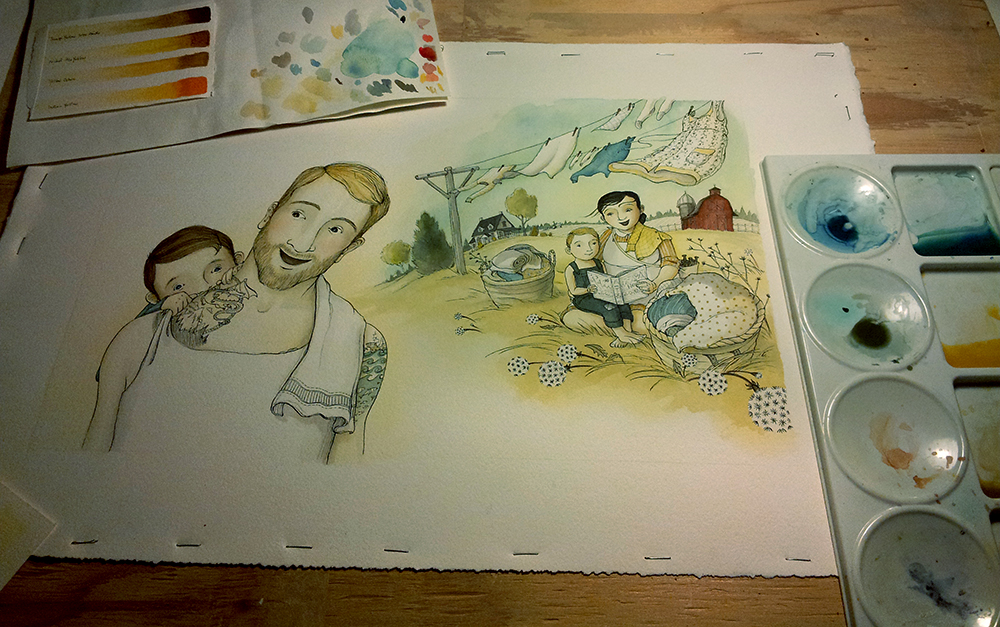 The solution was to make the present day colors not only more monochromatic, but also to only use cool hues. So I used a limited range of blues with only a touch of skin tone for the present, and I made the colors in the flashback predominantly warm hues. There were also some tweaks in the characters that I made, because I felt I was getting a tiny bit too cartoony for what I had imagined. Here’s how the revised (and final) piece came out: 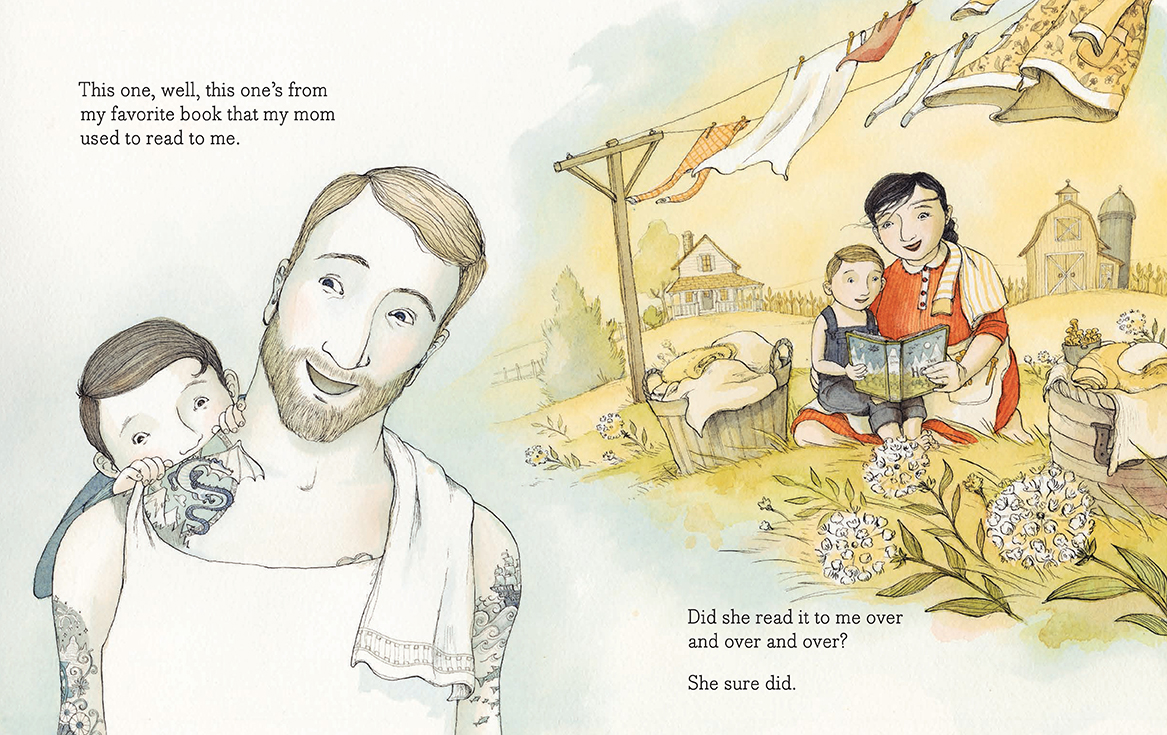 While the present day scenes keep the same muted color palette, the flashbacks have their own unique color scheme. The memories take place randomly from the dad’s childhood, to the birth of his son, so by making each memory unique there’s a sense of the passing of time from memory to memory.

I kept this treatment up through the whole story, until the very last scene, here: 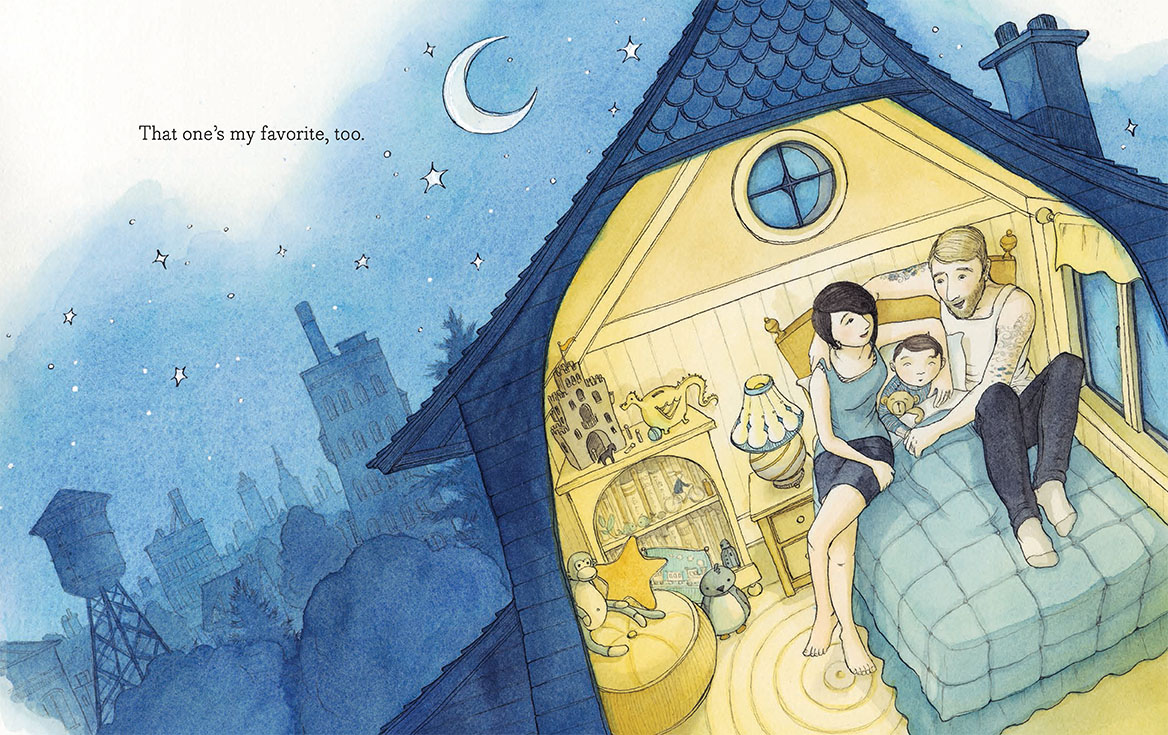 This is a present day scene, but it’s treated as though it’s a memory. I wanted to suggest that this moment–storytime with his son–will soon become another precious memory. So I’ve combined the present day and memory color palettes by blurring the edges and creating a bright blue and yellow version of the blue/beige present day color palette.

And if you’re wondering what this new story-time-memory’s future tattoo might look like?
Go back to the beginning and take a look at the title page: 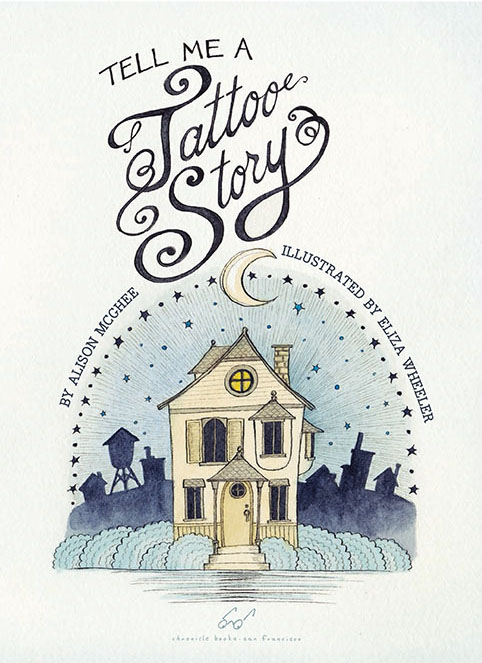 I also wanted it to feel like the dad has many more stories and tattoos than the ones featured here, so I filled the endpapers with tattoos. Maybe readers will be able to imagine more memories for all the other tattoo designs? 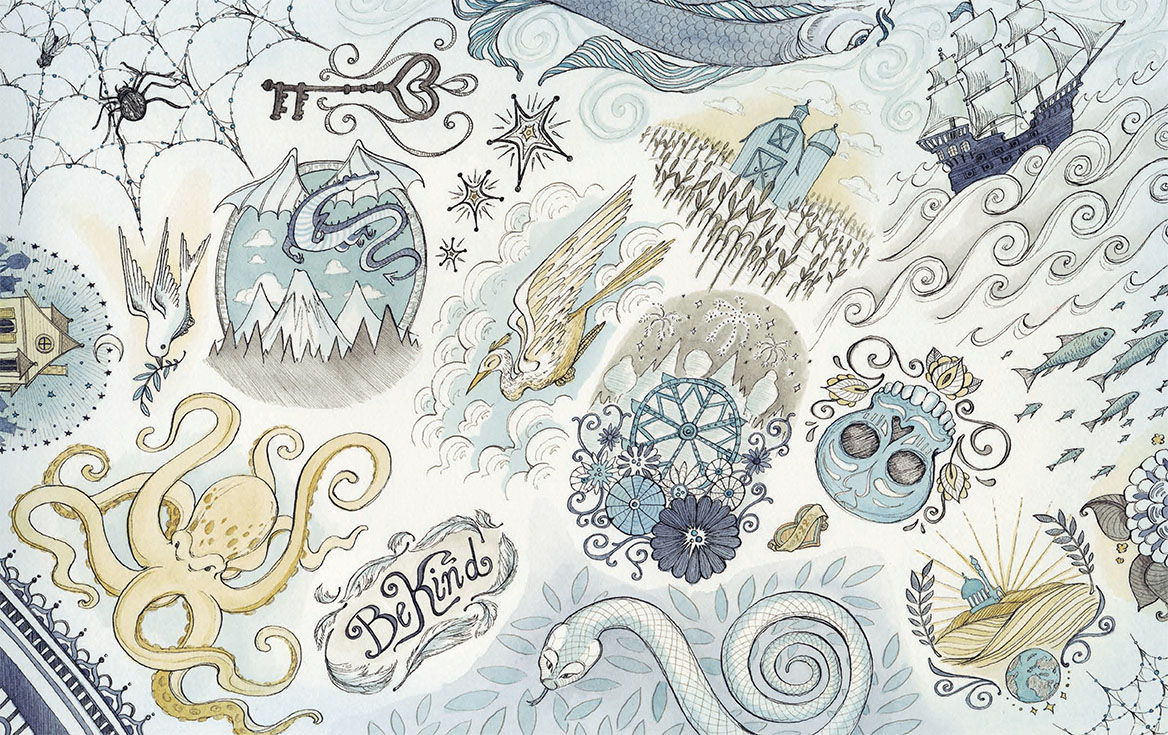 Last weekend I was on a panel of picture book artists at the Los Angeles Times Festival of Books, which was moderated by Lee Wind, who pointed out that diversity is such a big issue in children’s books these days, and that this book shows us inclusion of a different sort. Rather than being about a cultural issue, this book tackles a topic that may be taboo for previous generations, who have generally (not all, of course) held negative stereotypes towards tattooed people. Nowadays we see a lot more new adults (and new parents) with many tattoos. More people are seeing them less as acts of rebellion, and more as acts of creative expression.

While I was signing books in the Chronicle Books booth later that day at the LA Times bookfest, a woman approached me with the book and said:
“So . . . I saw this book . . . and you know . . . most people in my generation view tattooed people as the scum of society. But I keep seeing more and more tattoos on young people these days. This book made me think differently about tattoos. It helped me understand what tattoos can mean to people.”
She bought the book!

To read more about TELL ME A TATTOO STORY, check out this write up in Kirkus Reviews:
www.kirkusreviews.com/features/tale-tattoos

To have a chance to win a copy of TELL ME A TATTOO STORY, comment on this post!