Last spring I got a sneak peek of a book that bowled me over, Candy Fleming and Eric Rohmann’s Giant Squid.

It’s unlike anything I’ve seen before. Take a look at this opening page. 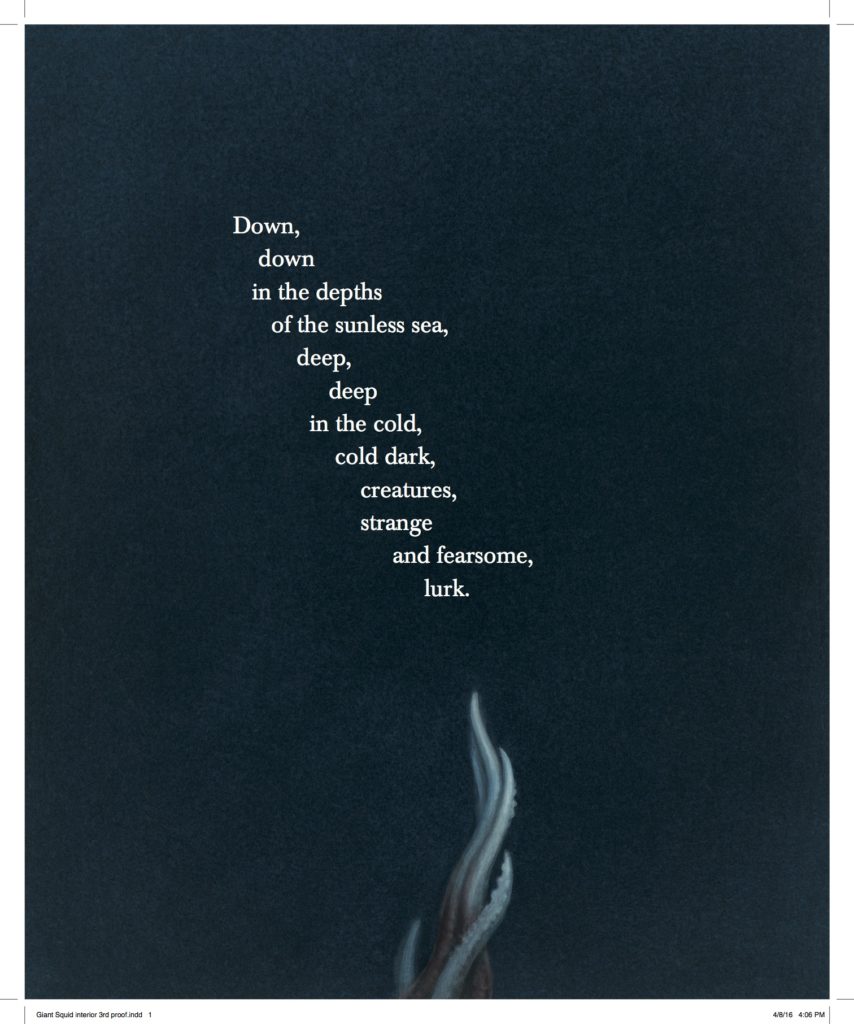 That glimpse of tentacles waving in a vast full spread of undersea darkness? Gives me the shivers. The entire book has a lush, theatrical feel. Words and pictures combine in a way that makes it seem like you’re watching a movie in an IMax theater with some deep-voiced guy narrating in surround sound. And get this:  Like a movie, this book has a five-page intro/buildup before we even get to the title page reveal.

So, Candy, how did you come up with the idea for this gem? Explain your brainstorming as you shaped this book – the decision, for example, to never show the entire creature until … well, I’ll just let you tell us.

Candy:  It began on a napkin. In 2008 we were having lunch (no, not calamari) with his editor at the time, Simon Boughton, talking about an idea for a book. Eric drew rough sketches of a giant squid, well, actually parts of the giant squid. The initial idea was to use double page spreads to show the main parts of the squid. Each page would have tentacle, or beak, or mantle, etc. That is, the idea was to create a book where each individual “piece” of the creature is examined, ultimately leading to its “whole.” 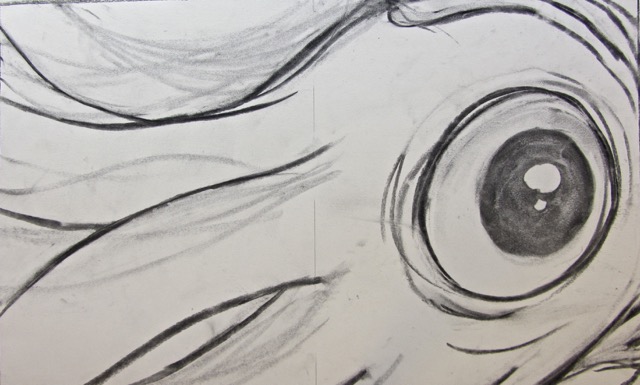 After all, that’s exactly how naturalists and scientists have learned about the giant squid, part by part. Only in the last decade have we glimpsed the creature in its natural environment. For the most part, our knowledge has come from studying pieces of giant squid washed up on beaches, or from bits found the bellies of sperm whales. Both of us loved the idea of a book about giant squid that could be read in the same way scientists have collected data about them. Page turns mirroring the slow discovery of what we know about the creature. 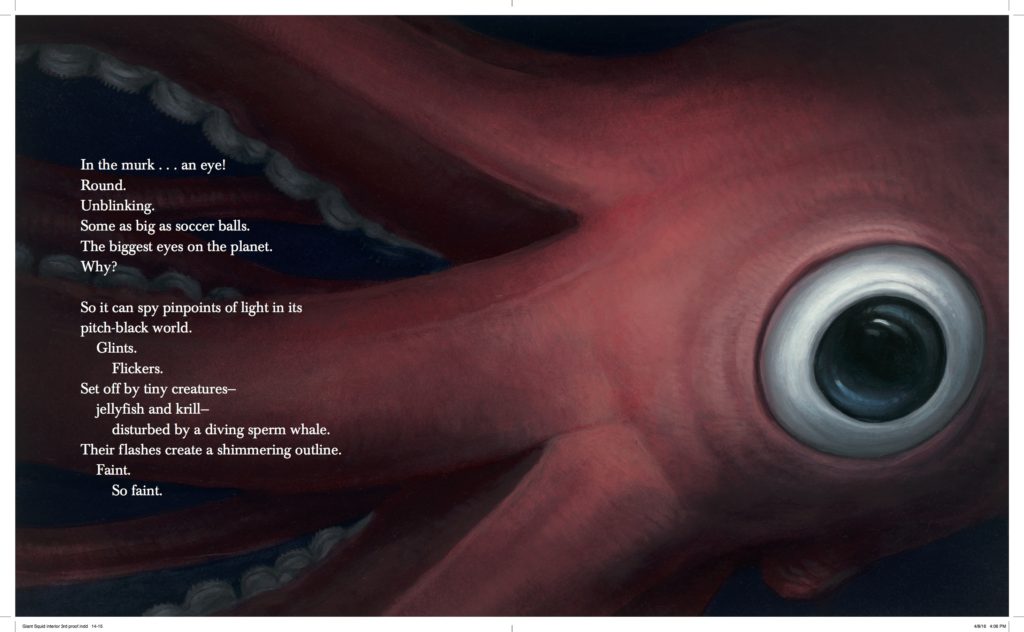 We were mostly intrigued by the mystery of the giant squid. Think about this: giant squid are so elusive that scientists cannot definitively say how many live in the world’s oceans. But judging from number of beaks found in the digestive tracts of sperm whales and albatrosses the population must be at least in the hundreds of thousands– and yet we know next to nothing about their mating habits, or schooling habits. We’re not sure how they hunt, or mate or raise their young. That “not knowing” became the book’s focus. This premise forced both of us to think out-of-the-box in regard to science nonfiction books. Typically, these types of books provide the reader with facts about a particular subject. Giant Squid, however, does the opposite. It emphasizes what we don’t know, its text full of as many questions as hard facts. 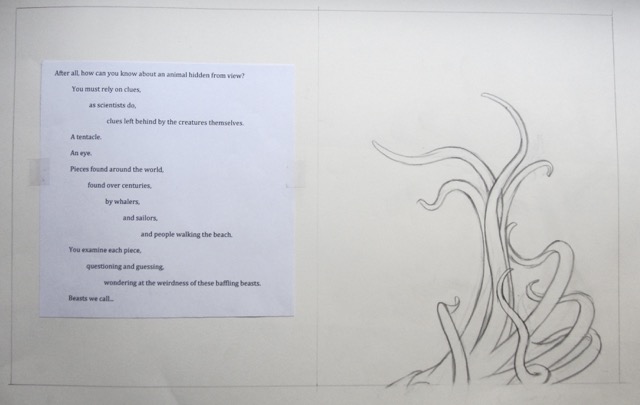 Adding to this mystery is the giant squid’s habitat. There aren’t many places darker, stranger and scarier than the deep sea. What’s lurking down there? There are people who won’t even dangle their hands in the water for fear of the unknown. What could be a better, creepier, more mysterious setting? 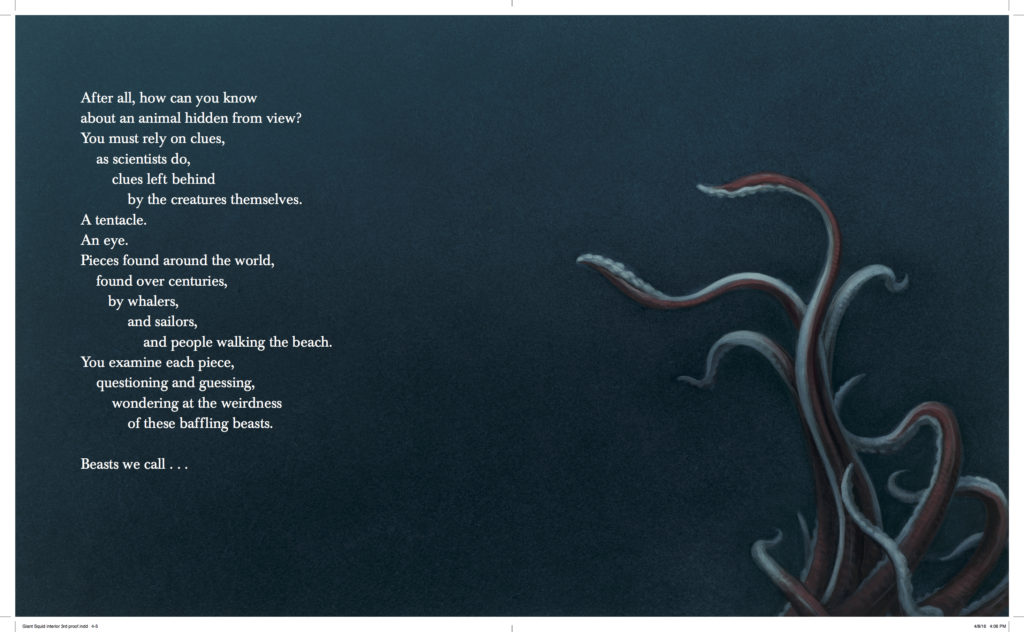 I would like to write that all this brilliant thinking occurred while we sat in that restaurant, Eric sketching away on a napkin. It didn’t. But the original impulse began there. 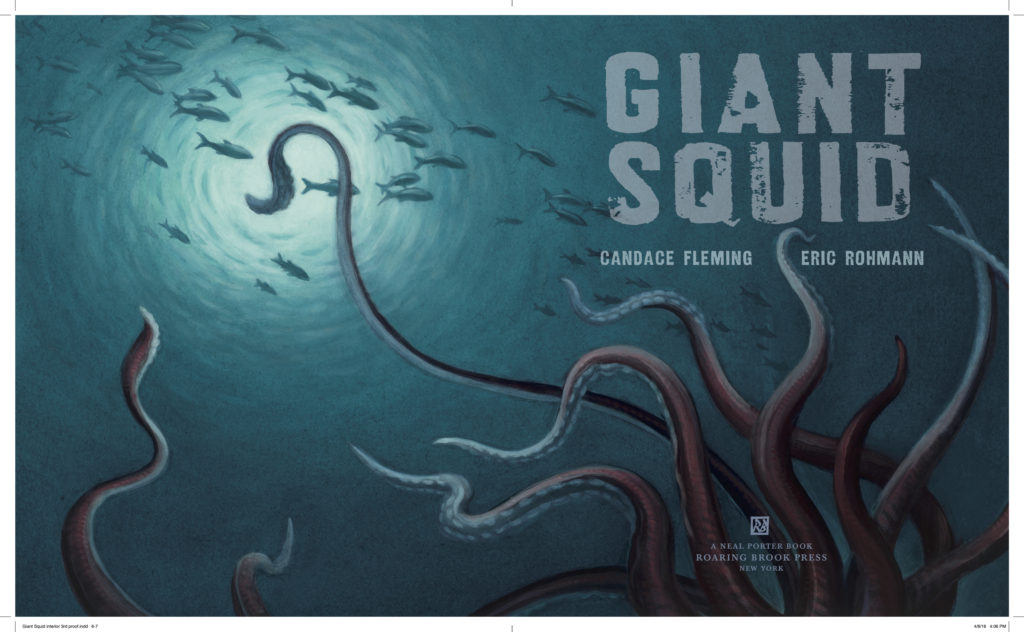 I would also like to say that I was onboard this project from day one… napkin day. I wasn’t. This was Eric’s project originally, fueled by his curiosity and passion for giant squid. (And he does have a passion for them!). In fact, he had already written a text and created a storyboard when I stepped into the project. He wasn’t satisfied with what he’d written and asked for my help. I agreed, but there was one problem. The book already had illustrations. It already had a solid storyboard with page turns and structure. I was going to have to work backwards. Instead of writing a picture book manuscript that would subsequently be interpreted by an artist, I was challenged with writing words that fit with the art. Happily, Eric’s writhing, lyrical sketches and preparatory art inspired an equally writhing, lyrical text. The book arose this way: I responded and wrote after looking at Eric’s art. Then I handed it back to him and he added, subtracted and altered his images. Then back to me and we repeated the process until we arrived at the story you see when you open the book. It was a disorienting, exciting, frustrating, challenging joy to make.
Once we had completed text and preparatory art, we looked even more closely at the entire book as a whole and again made changes. It became immediately clear that the title page, as well the book’s front matter took the reader out of the deep ocean and onto a page. We wanted them to feel as if they were in deep sea with the giant squid without explanatory text or front matter to push them out of the experience. In the end we chose to start the story—in a manner often done in film– and move the title page back to page six.

Jill:  How involved was your editor?

Candy:   Throughout this process, our editor, Neal Porter at Roaring Brook Press patiently waited, advised, encouraged and nudged us forward. Eric had originally wanted to use a printmaking technique called monotype to make the images. This proved difficult and after a few months of false starts and inadequate results we put the project on hold. In fact, we abandoned it. But Neal would have none of it. His faith in the book, his vision for what it should and would become never flagged (often to Eric’s awe and irritation!). So he went back to the studio with renewed energy. Two months of work and he still was not happy with the results. With four months left until the deadline, Neal visited us and his enthusiasm (and Eric not wanting to let the project just dangle) got him started again. With such a short amount of time to make 19 images, Eric turned to oil painting, a technique that he has used in the past, as well as one that required less process and would fit the book well. The result is the book you see today.

Jill:  People, honestly, you have to see this one. Giant Squid releases today and has already garnered starred reviews from SLJ, PW, and The Horn Book.

Released last week, also to rave reviews, was Candy’s Presenting Buffalo Bill: The Man Who Invented the Wild West. Gallop on down to the nearest bookstore or library and take a look!

Thanks SO MUCH for visiting with us, Candy (and Eric)! Always fun spending time with you.

Ashley Bankhead! You won the Skype Q&A author visit with Suzanne Slade for Mrs. Heathcock’s 5th grade class at Hillsdale Elementary in Meridian, ID. Woot! Please email Suzanne through her website (www.suzanneslade.com) or have the teacher email her directly to set up the visit.

Patty Toht! You won a copy of Suzanne’s new book, The Music in George’s Head. Congrats!

Also, a brief FYI: Our friend Pat Zietlow Miller has a super busy autumn ahead, so she’s taking a break from blogging (don’t worry; she’ll be back in January). Stepping in to fill her always-fabulous shoes is former PBB member Barb Rosenstock. Barb will bring us a series of interviews with big name (think their own imprints) editors. How cool is that? I KNOW! Stay tuned!